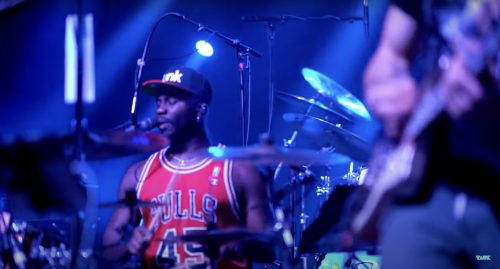 I’m not much for jam bands. But I did grow up in Chicago in the 1990s, so I will support anyone covering Quad City DJs’ beloved Space Jam theme song. And if a jam band does it – and, given the movie and song title, I’m surprised more don’t – I’m all for it.

Last month in Chicago (naturally), two newer jam bands called TAUK and Pigeons Playing Ping Pong combined for an epic thirteen-minute “Space Jam” jam, and they just put the video up on YouTube. TAUK drummer Isaac Teel leads the vocals while wearing a Michael Jordan jersey – #45, no less, the number MJ sported for a minute when he returned from his baseball sojourn and the NBA wouldn’t let him wear his iconic #23. But it is a jam band, of course, so the real sparks fly when the singing drops out and the two bands get weird. It doesn’t even sound like “Space Jam” for a while, but does bring it back by the end. END_OF_DOCUMENT_TOKEN_TO_BE_REPLACED