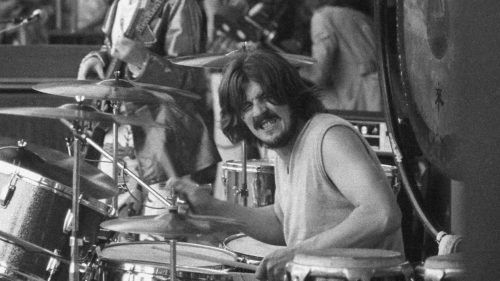 Anyhow, it was in one of these long fawning articles the rock music glossies are so fond of that I discovered the back story of how “Rock and Roll” practically wrote itself in minutes, or at least the melody line. Messing around in the studio, John Bonham suddenly kicked off into an embellished drum intro, “borrowed” from Little Richard’s “Keep a Knockin’.” Jimmy Page instinctively banging in with the riff that basically is the song. With lyrics come from ye olde school rocke thesaurus, Robert Plant’s keening banshee of a vocal somehow imbues a meaningful basis for it all, whilst John Paul Jones’ subterranean bass underpins the whole thing. And, just when you are thinking it all a bit derivative, a final touch of brilliance: single note piano pounding it into the home stretch, courtesy of sixth Stone Ian Stewart.
END_OF_DOCUMENT_TOKEN_TO_BE_REPLACED