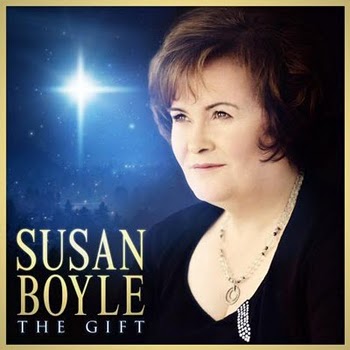 Haters be damned; this woman can sing! The vocals on The Gift deliver. The legions of critics who’ve extolled the virtues of Boyle’s vocal ability were correct. Listen to The Gift; Boyle’s voice truly soars here. Take a track like “O Come All Ye Faithful.” You’ll wish your church had singers like this! The main problem lies with the rest of the sounds on the album. Boyle’s production crew essentially bury The Gift in a wash of sappy strings, overwrought piano and choirs that occasionally drown out our star’s lead vocals. The album never pushes its tempo above that of a coma patient’s heartbeat, which leads to a pretty same-sounding, drowsy listening experience. “The First Noel” breaks from this slightly to give us some crisp acoustic guitar accompaniment, thus taking its place as my favorite song on the album. END_OF_DOCUMENT_TOKEN_TO_BE_REPLACED

This week Susan Boyle drops her sophomore album, the Christmas disc The Gift (look for a review soon). In addition to holiday staples like “The First Noel” and “Away in a Manger,” Boyle throws in a few more twentieth century tunes. One is Lou Reed’s “Perfect Day.” If you remember, Boyle’s connection to “Perfect Day” first made headlines when Reed supposedly denied her permission to perform it on America’s Got Talent. Reed’s people clarified that this was simply a legal issue, but the image of the inexplicably adorable singer – Boyle, not Reed – “sobbing her eyes out” at LAX proved difficult to shake.

Ever penitent, Reed not only allowed her to include “Perfect Day” on the gift; he directed the music video. His directorial style could be summarized in two words: more mountains. Well, it is Scotland after all. Boyle emotes from a loch, emotes from a forest, and emotes from, yes, a mountaintop. Check it out below. END_OF_DOCUMENT_TOKEN_TO_BE_REPLACED