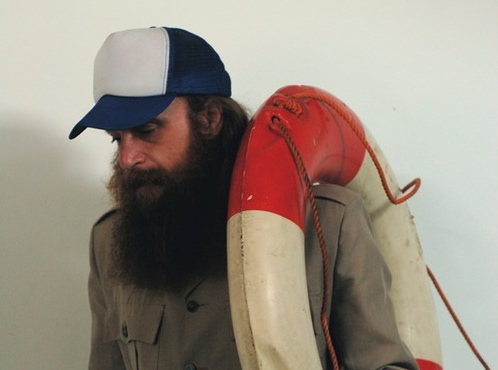 We at Cover Me get excited when a musician finds a genre twist that transforms a cover song’s meaning. Previously, we mentioned Laurence Collyer as the one-man-band member of The Diamond Family Archive who excels in doing just that. This Brighton-based musician takes generally upbeat pop songs and twists them into sad and lonely little folk and acoustic numbers. In his latest set, Collyer was kind enough to indulge us with an exclusive EP of outtakes from his brilliant 2009 cover album, The Wanderer. Some are alternative performances of album tracks; others are never-before-heard covers. END_OF_DOCUMENT_TOKEN_TO_BE_REPLACED

–Edit: Lots of posts disappearing from blogger. I’m reposting this one with links since it was so recent, but the others will be sadly link-less.–

An exciting day tomorrow. I don’t even remember what it’s like to have a government I trust, so it’ll be nice to see old G-Dubs head back to Crawford. Here’s hoping that Obama and co. can get this country back on the road to peace, justice, and compassion.

Elliott Murphy – Better Days (Bruce Springsteen)
One of Springsteen’s better songs from his stagnant period with the “Other Band” in the early 90’s. He often joked that after decades of songs about the down-and-out, when he finally wrote some happy songs, everyone turned away. Sounds like he’s back to positivity with next week’s Working On a Dream though. We’ll see how that pans out. [Buy]

Sanctus Real – Beautiful Day (U2)
U2’s Christian roots are widely known, though one would be amiss to call them “Christian rock.” In fact, most Christian radio stations will play covers of U2 songs, but not the originals. In that case, they might play this one, from an all-Christian rock cover disc to U2 released for charity. Sanctus Real crunchifies this recent cut, keeping it just stadium-ready enough at the chorus. [Buy]

Ellen McIlwaine – Higher Ground (Stevie Wonder)
The third in our string of Inaugural performers is the most relevant; this is actually the song Wonder chose to perform yesterday with Usher and Shakira (video). Originally a classic soul stomp, McIlwaine’s funky blues guitar takes it a completely different direction. [Buy]

Pearl Jam – People Have the Power (Patti Smith)
It’s a popular song for the politically-conscious artist to take on, be it Bruce Springsteen or U2. At a live show in ’03 Eddie Vedder propelled the band through this grunge-rock growl of an anthem. You can see him perform it with Smith herself here. [Buy]

Status Quo – Getting Better (The Beatles)
A cut from Sgt. Pepper’s getting even more orchestral and layered? Not possible you say? The Quo is here to tell you different. With strings, horns, and glockenspiel, the sound matches the optimism. [Buy]

Doyle Bramhall – I Can See Clearly Now (Johnny Nash)
It’s a hell of a song, but most versions of this soul classic sound about the same. Not true of Bramhall’s blues rocker, copious guitar work embellishing the joy in his voice. [Buy]

Cold War Kids – A Change Is Gonna Come (Sam Cooke)
It’s a live one, from a set at Bonnaroo ’07 at which they also covered the much more pessimistic “Dirt in the Ground” by Tom Waits. This one’s been cited a lot recently, first in Obama’s Grant Park acceptance speech in which he said “It’s been a long time coming, but tonight, because of what we did on this date in this election at this defining moment change has come to America.” [Buy]

Floyd Dixon – Blue Skies (Tom Waits)
Nope, this isn’t the Irving Berlin song of the same name (though that would have been a good choice too), but a very early Waits songs that he never saw fit to put on an album. A shame, because this tale of moving beyond hardship is beautiful. The guys knows he has a long way to go to be happy again, but he’s willing to try. It’s a good metaphor for America these days actually. [Buy]

Bob Dylan – This Land Is Your Land (Woody Guthrie)
Pete Seeger and Springsteen sang this one at the Inauguration concert and, fun as that was, it didn’t reinvent the song like Bob did at a 1963 show. Toying with the melody as is his wont, Dylan doesn’t let reverence to his idol interfere with a fresh interpretation. Woody would have been proud. [Buy]