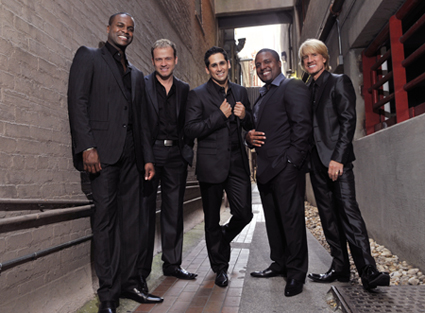 Where in the world has Rockapella been? This group, best known for providing the house music on a certain globe-trotting television show, has been delivering their unique brand of vocals-only rock since 1986. Their last studio release came a full eight years ago; that is, until last month, when almost out of nowhere the group dropped Bang. Bang happens to be the second Rockapella release to consist wholly of material written by the group…except for the bonus track.

On their cover of “A-Punk,” the tune that made Vampire Weekend a household (read: frat) name, Rockapella slows things down a bit to really find the song’s groove. In doing so, they bring to the surface the threads of Graceland-era Paul Simon that tend to populate Vampire Weekend’s music. It’s a pretty fantastic cover (I really dig the low bass of George Baldi III). It’s nice to hear what Rockapella can do when they don’t have to spend all their time helping kids bring criminals to justice. Check out the track below for the price of an email address and let us know what you think! END_OF_DOCUMENT_TOKEN_TO_BE_REPLACED