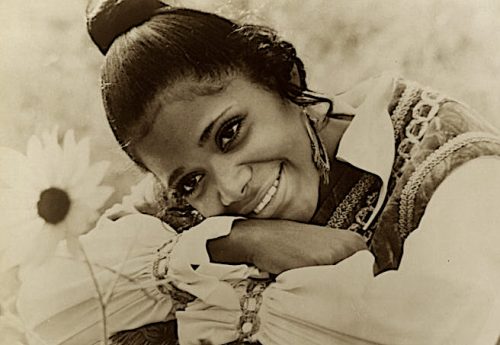 Musical obsessions are not always as cut and dried as “this is my favorite song/ album/ band/ genre.” Occasionally you will find yourself in uncharted territory, involuntarily drawn to something so specific and esoteric that it doesn’t fall under the umbrella of an actual existing category. Hmmm… I’m making this sound way more dignified than it is. What I’m trying to say is, most dyed-in-the-wool music nerds have what I’m going to call an imaginary friend. By that, I mean that they have an obsession with some weird-ass thing or self-invented category, one that may not be audible to the ears of others, but feels oh so real to them.

I am now going to introduce you to my imaginary friend, my Harvey, my Snuffleupagus, my Drop Dead Fred. It’s a “thing” I’m obsessed with, which, while exceedingly specific and adhering to a strict set of self-invented rules, doesn’t technically exist as an established, formalized entity.

In a nutshell, I have an insatiable fascination with R & B covers of ’70s Soft Rock songs. Specifically, those recorded in the same era as the originals, when the originals themselves were still young, topical, and ubiquitous.

This oddball interest has roots in all the times I spent as a captive backseat passenger in my Mom’s 1972 white Chevy Nova with the sunflower painted on the side (only one word for that car: bitchin’). It was in this magical machine that my musical foundation was established and my taste was, some might say tragically, molded into shape. Meaning I was exposed to a helluva lot of ’70s AM pop radio as a kid. And there were two things being churned out in ample quantities back then that I especially loved:

1. R&B aka Soul Music (the first single I ever bought was by The Spinners, the first LP was by Billy Preston)

For a specific subgenre, “Soft Rock” is a pretty broad descriptor. The term has come to characterize the adult incense burning-cool babysitter sounds of Carole King and James Taylor, as well as the candy-coated, big-chorus-ed corniness of Barry Manilow and the Captain and Tennille. While we tend to draw a distinction between these two types of Soft Rock (the former is “cool,” and the latter… isn’t), back then, to my kid ears, they were the same damn thing, 100% equal in terms of their artistic credibility. They were all served up on the same radio stations, so in my world, Jackson Browne and Helen Reddy were as one. It was all pop music.

My sloppy love for both the Soul and the Soft did not trigger a lightbulb moment where I thought, “hey, I love these two things and I wonder if there are artists who have perhaps married the two.” Lord no. That would have been far too sophisticated a notion to have ever sprouted up in my eight-year-old peanut brain. My fascination with the marriage was a more random pursuit that defined itself over time. I think it may have been triggered by hearing The Four Tops’ incendiary cover of Fred Neil’s “Everybody’s Talking” on some compilation in the ’80s. I honestly can’t remember. What I do know is that as technology advanced, my pursuit grew more and more fanatical with each passing day.

Once I could get at discographies with the touch of a button, the nerd assembly line kicked into high gear. Stores were scavenged for Soul-ified Soft Rock treasures. Mixtapes were assembled, followed by mix-CDs, finally culminating in an immense iTunes playlist I pathetically titled, yup, Soul in the Middle of the Road, that grew to feature hundreds of songs. They ran the gamut from transcendent (some rivaling or surpassing the originals in terms of beauty) to horrible (oh man) to just straight-up bizarre (you’ll see).

As alluded to earlier, my main interest is in covers that were recorded during the same era as the originals, in or on the edges of the ’70s. These covers offer a direct nod to the ubiquity of the originals and capture the spirit of that swingin’ era in a way that is impossible for a latter-day cover to achieve (to me, anyway).

I now humbly offer you 30 of the finest, weirdest, and “what the holy hell was that” soul-infused covers of classics and beloved deep cuts from the sweet ‘n’ vast Soft Rock canon. Now I’m sure some of the artists I’m about to mention would bristle at having one of their works characterized as “Soft Rock,” but hey rock star, you made a Soft Rock song, so you know, that’s on you (also thank you, you sexy thing). At the end of the day, they should all feel grateful and flattered to have had their sweetest sounds so soulfully celebrated.

As for me, I hear love in every one of the covers that follow and genuinely hope you can too. Take it away, Tops…