Every week it seems four out of five Bandcamp covers are acoustic bedroom recordings. Well, not this week. The blogosphere has been hit with a heavy dose of dubstep recently – James Blake, Radiohead, even Britney Spears – and so, apparently, has Bandcamp. Three out of the five covers today feature dubstep influences, making it an unusual set indeed. END_OF_DOCUMENT_TOKEN_TO_BE_REPLACED

Featured on soundtracks like Life as a House and Wedding Crashers, their songs can pull at the heartstrings as you croon along with them. On the other hand, they are better known for their laid-back, wisecracking personalities that beam from the stage and infect their fans. During their years of touring, they have taken on many cover songs with both their sensitive and playful dispositions (but mostly the latter). Typically at the end of a show, Guster will rile up the crowd with a number from Madonna, Talking Heads, or whoever sings the “Cheers” theme song (Portnoy) and get everyone involved.  Most of the time, it’s just an excuse to get drummer Brian Rosenworcel out in front showing off his questionable vocals, calling in the crowd for backup.  It’s just like being at a karaoke bar. END_OF_DOCUMENT_TOKEN_TO_BE_REPLACED

Do you have something to submit? Send it along here! END_OF_DOCUMENT_TOKEN_TO_BE_REPLACED 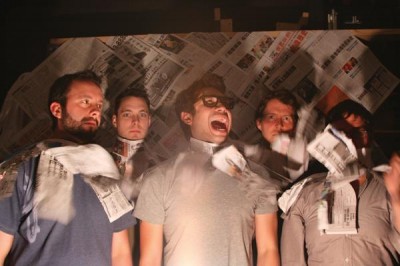 Sometimes fiction is better than truth. Phil Collins says “In the Air Tonight” is about his divorce. Yawn. Legend, on the other hand, says it’s about Collins watching someone stand by as another man drowned. Admittedly, this begs the question, why wouldn’t Collins just help since he’s clearly standing right there? But no matter. He later invited the guilty man to a concert, then threw the spotlight on him while he sang this accusatory song. Fantastic, brutal tale. I’ll take fiction over truth.

So let’s make up a new legend! Here goes… Brooklyn quintet Takka Takka attended a Collins concert a few years back. During the encore, the band started “In the Air Tonight” with Phil at piano. About two minutes in, the drummer grabbed his chest with one hand (ever a professional, he continued playing with the other). He began to shake, eyes slowly rolling back, even as he kept ticking away. Phil’s piano faced the drum riser and the concerned look in his eyes indicated he saw this. But the band was only thirty seconds from the drum break – the break that every member of the crowd, Takka Takka included, had been waiting for all evening – and Phil was damned if he’d stop the band before they got there. Even as the drummer began to turn green, Phil pressed on. The drum break finally arrived. The drummer executed it perfectly. Then he spontaneously combusted. END_OF_DOCUMENT_TOKEN_TO_BE_REPLACED

Do you have something to submit? Send it along here! END_OF_DOCUMENT_TOKEN_TO_BE_REPLACED