We’ll be honest: 1996 was not some magical, pioneering year for cover songs. It was also not a terrible year. It was just, you know, another year. There’s no overarching theorem of 1996’s cover songs that wasn’t true in ’95 or ’97. But even so, Cover Me wasn’t around in 1996, so we never made a Best Cover Songs of 1996 list (our first year-end list came in 2009, with the Kings of Convenience’s “It’s My Party” topping it, and you can catch up on all the lists here). So we decided, before the year ends and we take our look at the best covers songs this year, why not take a nostalgic rewind and do 1996 just for fun, twenty years too late. END_OF_DOCUMENT_TOKEN_TO_BE_REPLACED 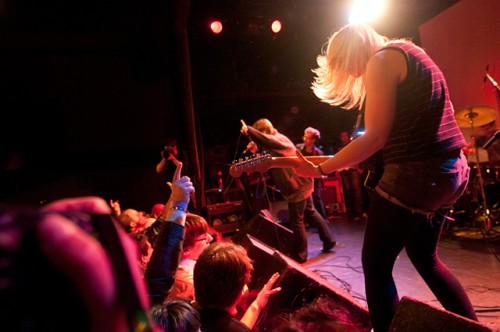 Last night a slew of alt-indie heroes descended on New York’s Bowery Ballroom to pay tribute to the bands featured in Michael Azerrad’s era-defining tome Our Band Could Be Your Life: Scenes from the American Indie Underground 1981-1991. Ted Leo covered Minor Threat, Titus Andronicus did the Replacements, and, strangest of all, Dirty Projectors played Black Flag. END_OF_DOCUMENT_TOKEN_TO_BE_REPLACED

Well, maybe they passed on that first Hanukkah, but it seems they’ve played eight crazy nights of shows every year since. Twenty-ten was no exception. As chronicled at BrooklynVegan, the nights of December 1-8 each saw a unique Yo La Tengo show go down at Maxwell’s in New Jersey. Every evening featured surprise openers and comedians, including heavy hitters like the National and Jeff Tweedy. END_OF_DOCUMENT_TOKEN_TO_BE_REPLACED