Misfits go mariachi! Adam Green, best known as one half of the Moldy Peaches, plays “All Hell Breaks Loose” like it was “Ring of Fire.” He writes: “In The Misfits and in his glorious solo work, Danzig bridged punk and metal with the blue-eyed soul music of the mid-1960’s like The Righteous Brothers and The Walker Brothers. I’d had an idea for a while to do a Scott Walker / John Franz style production at punk speeds, and the Misfits song ‘All Hell Breaks Loose’ seemed like the perfect vessel for the experiment.” END_OF_DOCUMENT_TOKEN_TO_BE_REPLACED 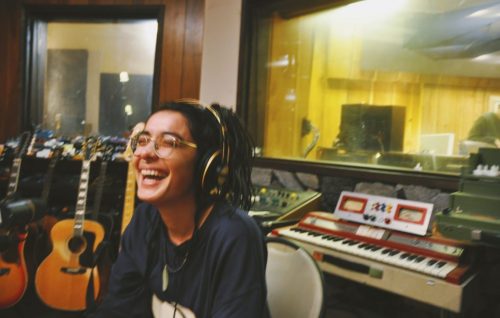 The band hasn’t released an album in four years, but bassist Jenny Lee Lindberg, who records as “jennylee,” just continued their dramatically-remade cover tradition. For an upcoming Record Store Day 7-inch, Lindberg recorded a cover of Fugazi’s “I’m So Tired.” Like “Billie Holiday,” it sounds far different than the original. END_OF_DOCUMENT_TOKEN_TO_BE_REPLACED