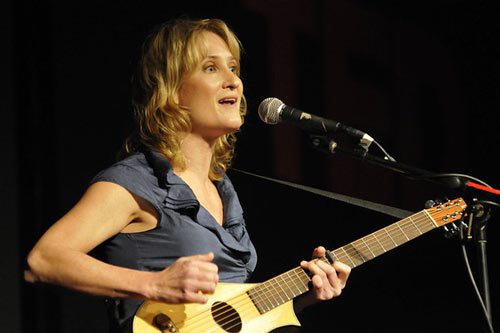 This shouldn’t be as difficult as it turned out to be. A cover song birthday tribute to someone as talented as Jill Sobule, someone who has one of those songs that everybody seems to know, one that, in the benighted era of 1995, was considered a milestone in the mainstreaming of same-sex relationships (predating the famous Ellen kiss by a couple of years), should be a piece of (birthday) cake. Someone like that, with nearly a dozen studio releases and multiple soundtracks and compilation album appearances, should be pretty widely covered, making our job easier. Because that’s what we do here to commemorate artists’ birthdays — we write about cover versions of their songs. And yet, covers of Jill Sobule songs are surprisingly difficult to come by. I thought about asking for a dispensation from the Cover Me Powers That Be to write instead about Sobule’s covers of others, which are plentiful and interesting. But my pride refused to let me cave in, so after some hard work mining the Internet and wading through way too many YouTube videos of (mostly) young women sitting in their bedrooms strumming ukuleles or acoustic guitars into webcams (and an unfortunate number of covers of Katy Perry’s inferior copycat girl kissing song), I was fortunate to discover a few worthy covers for this piece.
END_OF_DOCUMENT_TOKEN_TO_BE_REPLACED