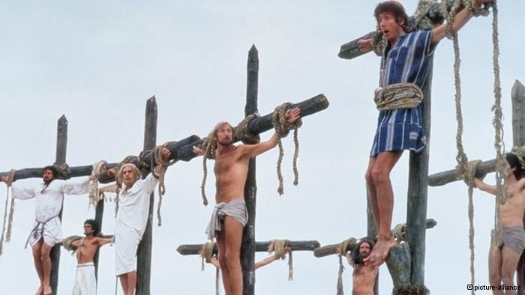 In honor of Eric Idle’s 71st birthday tomorrow, let’s pay tribute to his most famous song, “Always Look on the Bright Side of Life,” from Monty Python’s Life of Brian. Idle, of course, is best known as a comic actor and writer and a member of the Python troupe and not as a songwriter. However, this surprisingly happy tune, with deceptively dark lyrics, sung by Idle and a group of fellow crucifixion victims at the end of the film, has become remarkably popular. It was a parody of the peppy songs often featured in Disney movies, but over time its ironic underpinnings have been ignored in favor of its upbeat chorus and jaunty whistling (suggested by Neil Innes, who wrote most of the music associated with the Pythons).
END_OF_DOCUMENT_TOKEN_TO_BE_REPLACED

November 22, 1963 is a date that resonates with people the world over – not least because it’s the day that both Aldous Huxley and C.S. Lewis passed away – but it’s an important date in the music world too. It was on this day, fifty years ago, that the Beatles released their second album, With the Beatles. Certainly that date resonated with the Beatles – they released the White Album five years later to the day, and that was no coincidence – and the music they released on that fateful day had proven to resonate just as long.
END_OF_DOCUMENT_TOKEN_TO_BE_REPLACED