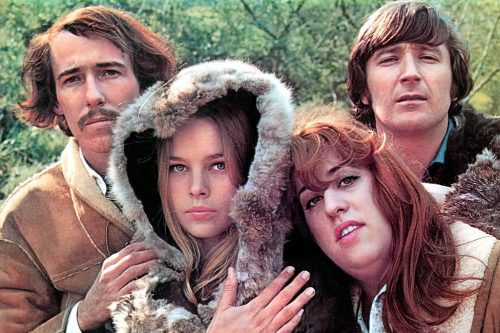 “This” was the start of “California Dreamin’,” the Mamas and the Papas’ first big hit. It was earmarked to be Barry McGuire’s next big hit after “Eve of Destruction” – they’d recorded the backing vocals for him and everything – but then the powers that be decided to strip McGuire’s lead and add Denny Doherty’s. The Mamas and the Papas version came out first, and in Los Angeles, it did nothing. But in Boston, a town that knows a thing or two about wishing for warmth in the dead of winter, it hit big, and from there it soon made it to all of America. (Even if most of America, including Cass Elliot herself, misheard the lyric “I got down on my knees / And I pretend to pray” as “I began to pray.”)
END_OF_DOCUMENT_TOKEN_TO_BE_REPLACED

August 16 has long been a day of infamy in the history of American popular music. It started in 1977 when Elvis Presley, the King of Rock n’ Roll, passed away. Forty-one years later, another member of rock royalty also died: Aretha Franklin, the Queen of Soul. Though she was older and her death less of a shock to the cultural landscape, I still remember the exact moment when I heard the news. I was with my family driving home from Sesame Place in Pennsylvania listening to the Beatles channel on SiriusXM. The DJ interrupted to tell us the sad news and in Franklin’s honor played her version of “Let It Be.” END_OF_DOCUMENT_TOKEN_TO_BE_REPLACED