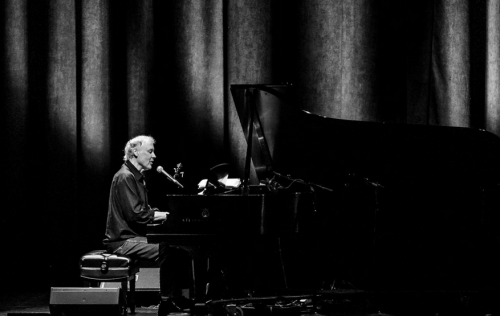 I’ll confess when this cover came across my desk, I had only heard The Beatles‘ cover of Chuck Berry‘s ‘Too Much Monkey Business’, and presumed that singer-songwriter Bruce Hornsby’s cover would be of a similar vein. I couldn’t have been more wrong. END_OF_DOCUMENT_TOKEN_TO_BE_REPLACED

If you missed the whole brouhaha when Steely Dan dropped Aimee Mann as their opening act, it’s too long to recap here. To skip to the end, Mann tweeted, “All is forgiven if Donald [Fagan] just tells me what Brooklyn is about.” And he did! So, at a recent show at City Winery, she covered it. All does indeed appear to be forgiven. END_OF_DOCUMENT_TOKEN_TO_BE_REPLACED

This one’s for all the Dylan superfans. In 1984, Bob Dylan played three songs on Letterman with L.A. punk band The Plugz. They were gritty and garagey and raw. It boded well for his new sound. And then he never played with them again. The album he was ostensibly promoting, Infidels, was much smoother, helmed by Mark Knopfler. For those who still wonder what could have been, Daniel Romano covered the entire album as if he’d recorded it with The Plugz. END_OF_DOCUMENT_TOKEN_TO_BE_REPLACED

Misfits go mariachi! Adam Green, best known as one half of the Moldy Peaches, plays “All Hell Breaks Loose” like it was “Ring of Fire.” He writes: “In The Misfits and in his glorious solo work, Danzig bridged punk and metal with the blue-eyed soul music of the mid-1960’s like The Righteous Brothers and The Walker Brothers. I’d had an idea for a while to do a Scott Walker / John Franz style production at punk speeds, and the Misfits song ‘All Hell Breaks Loose’ seemed like the perfect vessel for the experiment.” END_OF_DOCUMENT_TOKEN_TO_BE_REPLACED 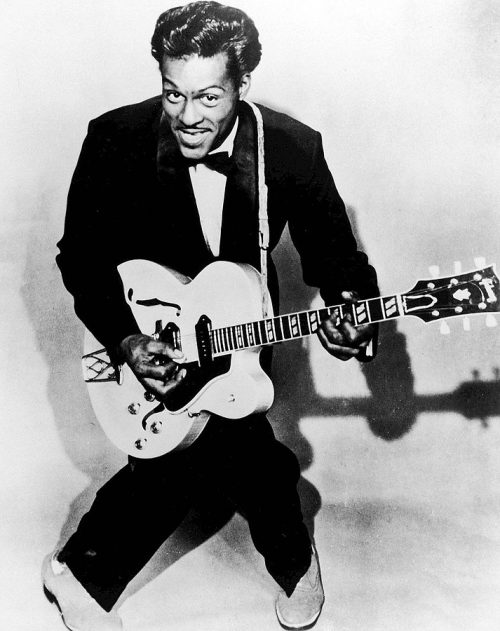 This was the drill: having specified beforehand that the promoter would provide amplifiers and a local backing band, Berry would arrive alone and head straight for the promoter’s office to collect his cash. After counting the money, Berry would walk onstage, plug in his guitar and start playing, often without speaking to the band or advising them of the evening’s setlist. He was known to occasionally fire band members mid-song if they couldn’t keep up. Eventually, at the climax of the night’s final number, Chuck would launch into his famous duck walk and disappear into the wings.  He would be in his car and speeding down the highway before the last guitar note had finished echoing around the room.

It wasn’t always this way. Charles Edward Anderson Berry had established himself in the early 1950s as a member of pianist Johnnie Johnson’s Sir John Trio in St Louis, and shortly arrived at Chicago’s Chess Records via a personal recommendation from Muddy Waters. Here, Berry would cut the vast majority of his classic sides, backed by a rotating cast of first-rate musicians including Fred Below, Willie Dixon, Matt Murphy, Lafayette Leake, Otis Spann, and right-hand man Johnnie Johnson.
END_OF_DOCUMENT_TOKEN_TO_BE_REPLACED

Just five years on from the release of the rapturously-received Music From Big Pink album in 1968, simmering tension had already begun to erode The Band’s all-for-one-and-one-for-all dynamic. “We couldn’t get along… ‘Up On Cripple Creek’ and all that stuff was over,” drummer Levon Helm told GRITZ magazine in 2002.  The decision to record an album of covers appears to have been something of a tension-relieving exercise, a chance for The Band to let their hair down and remind themselves why they had started making music together in the first place. No Civil War epics or songs lamenting the plight of the American farmer to be found here: Moondog Matinee was designed to be nothing more than a straight-up party. Ironically, however, it’s the diversions into more sombre territory that provide some of the the album’s strongest moments.
END_OF_DOCUMENT_TOKEN_TO_BE_REPLACED