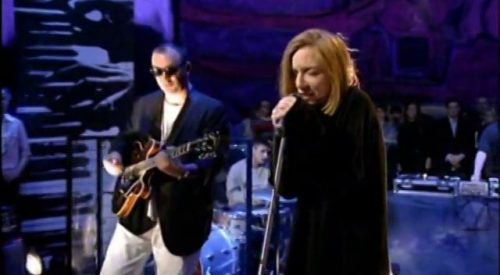 Had hipsters been prevalent in 1994-5, Portishead’s “Sour Times” would have made a perfect hipster wedding song. It had something old (the band was steeped in spy soundtracks of the ’50s and ’60s), something new (they didn’t invent trip-hop, but they did introduce it to millions of Americans), something borrowed (they sampled Lalo Schifrin’s “Danube Incident”), and something blue in Beth Gibbons’ sad vocals. “Nobody loves me, it’s true” she sings, then neatly dodges self-pity by adding “Not like you do.” Neo-noir as ’90s radio got, “Sour Times” was one of those songs that hooked listeners across the musical spectrum from the first seconds of the first listen. END_OF_DOCUMENT_TOKEN_TO_BE_REPLACED