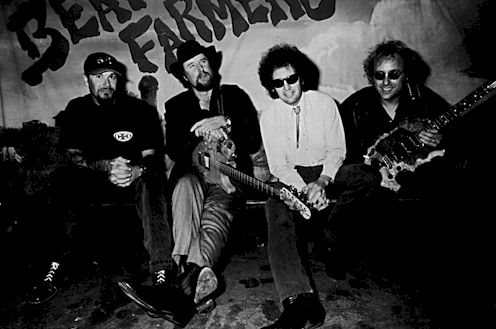 If you saw Daniel McLain in a bar in 1983 you might have assumed that he was president of his local Hells Angels chapter. Actually Daniel, better known as Country Dick Montana, was a much less threatening former record store owner, former high school class president and former president of the Kinks Preservation Society fan club. Back in 1983, while scouring San Diego looking to put together a new band – or “rolling musical pleasure machine” as he called it – Country Dick recruited Jerry Raney, Buddy Blue and Rolle Love. These guys became the Beat Farmers, a band with three singers and two lead guitarists, whose most enduring (and endearing) song was a 90-second ditty about a dead dog featuring gargling and a kazoo. Country Dick played drums, but also occasionally fronted the band. Imagine a cross between Johnny Cash and Sam Kinison and you have Country Dick’s stage presence. Country Dick called his fans maggots, and tossed beer on them. They loved it…and after the show, Dick would often stay and chat with the Beat Farmer faithful; he really wasn’t so intimidating after all. You could make the case that the Beat Farmers were the best bar band ever. END_OF_DOCUMENT_TOKEN_TO_BE_REPLACED