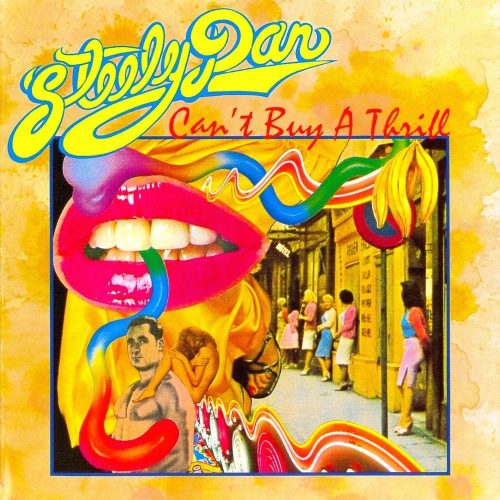 Can’t Buy a Thrill was always peak Steely Dan for me. Before they became too smooth, too clever, too polished and too damned good for their own damned good, they put together a set of sure fire songs that swiftly endeared them to a record buying public and remains a favorite in this household. Who can forget the gushing praise printed on the back of the cover, written by one Tristan Fabriani: “the newly formed amalgam threatens to undermine the foundations of the rock power elite.” Heady prose and, in due course, prescient, with Tristan, who played keyboards for Jay and the Americans, being eminently placed to pass such comment. Of course, you might know Tristan better under his given name: Donald Fagen.

But by the time Can’t Buy a Thrill was certified platinum, twenty years later, this critical slow burn had turned red. The album has taken up regular residence in best-of lists, whether of its year (13th), the ’70s (123rd) or all time (527th). Let’s remember Steely Dan in their less acerbic days and (slightly) simpler tunes, as covered by fans under the guise of artists in their own right.

The Jolly Boys – Do It Again (Steely Dan cover)

Spoilt for choice on this one; a fair few souls have been willing to put “Do It Again” through the mincer. Eli “Paperboy” Reed does a fine job with his Harry Lime-style swing’n’ska mash-up, but for my money it is the charm of Albert Minott and his idiosyncratic vocal that wins pole position. No strangers to these pages, the Jolly Boys are a glorious throwback to mento, a pre-reggae and pre-ska music form from the Caribbean, untainted by electricity or affectation, with the band supposedly performing without a break since 1945. This track comes from 2010’s Great Expectation, where the boys cover all sort of material with their naive and graceless charm, their spunky versions of “Riders on the Storm,” “Rehab,” and “Perfect Day” sounding oddly ancient in their hands.

A rarity in the Danon, in that “Dirty Work” is a song sung by other than Fagen. David Palmer took on this sweet and catchy melody; nominally the lead vocalist, he was ditched once Fagen got past his mic fright. This version is not so much of a reinterpretation, more an opportunity for the Pointer Sisters to parade their soulfully cracked vocals, ahead of joining together, gloriously, for the chorus. Sure, it is a bit more showbiz than the original, the sax break especially cheesy. It’s hard to now recall, but, at this stage of their career, the family band were quite the ones for an interesting cover. Finding their initial forays into a jazz and blues palette finding insufficient favor, in 1978 they hooked up with producer Richard Perry for Energy, adding some R&B zest to a host of white boy rock stalwarts. Alongside this song are others by Bruce Springsteen, Bob Seger, and Stephen Stills. Later still, they hit paydirt with the slick commercialism of “Black and White.”

Take a minute to listen to Mark Masters’ Ensemble’s cover of “Kings” before you read this. Go ahead, I’ll wait.

Did you make it all the way through? Or, perhaps, did you ever get to quite recognize it? I know, I know, but it is a cover, honest, coming from a full album’s worth of Dan covers by these estimable noodlers. I like it more in background anonymity, as trying to find the original Becker/Fagen in there somewhat defeats me. The rest of the album has some more recognizable songs, this being the “free”est contribution, but they seem one of the rare birds that have tackled this particular song. I find that strange, the original being pretty commercial by Dan standards, but there you go.

Never have the sometimes dense lyrics of Becker and Fagen sounded in such confident and capable hands as they do on Sara Isaksson & Rebecka Törnqvist’s album Fire in the Hole. The opening salvo of “Midnight Cruiser”–“Felonious, my old friend, step on in and let me shake your hand”–sounds entirely natural and unselfconscious. Stripped back to paired (and pared) voices and piano, this is one of the highlights on this enjoyable and enriching album, wherein the two Swedes manage to add a chock of warmth to a whole brace of Dan songs. More than the acidic duo could ever muster, certainly. And they say Sweden is a cold country…

Spring Wheel – Only a Fool Would Say That (Steely Dan cover)

Uncertain quite what genre this cover of “Only a Fool Would Say That” slots into. There’s a Latino soul sway in the arrangement, which sits somewhat uncomfortably with the frat boy singing, as opposed to the raggedy voiced péons the backing instrumentation begins to conjure up, a kinda sorta Brothers Johnson vibe. Spring Wheel came out of Cleveland in the early 1970s and made one album; “Fool” was the only cover on it. To be fair, at least thy have messed the song around a bit, with any other rendition aping the original with little thought other than facsimile. They considered themselves country rock, which explains the picture on the sleeve, with their choice of cover showing showing they had a little bit more to them than that alone. More marks for effort than outcome.

Feed Me Jack – Reelin’ in the Years (Steely Dan cover)

I was surprised quite how many versions there are of this absolute banger, even if most give it the Multiplicity approach. That’s the Michael Keaton clones film, featuring Keaton as sequential self-copies of diminishing returns. Most versions are overly faithful to the two ubiquitous hooks of Elliott Randall’s exquisite guitar line and/or the descending vocal runs of the verses.

Feed Me Jack were a Santa Cruz band between 2012 and 2016, with this cut coming from their 2015 Bandcamp release, Covers (free download, guys!). Their “Reelin’ in the Years” cover goes most the way to extinguish both big hooks, losing the guitar into a minor acoustic noodle before the vocals strip back the tune into bare bones, substituting the odd note/key change along the way. Gradually it pans out into a somewhat jazz funk digression, that sort of fusion the complete antithesis of Dan. A talkie bit then just goes weird on us, ahead some shimmery keys. Finally the distinctly stoned singer comes back in to reprise the rendition with another verse and it’s all over. I am uncertain still whether a total misstep or a masterpiece, erring today on the later. If Fagen and Becker ever give the ambience of not giving one, these guys sound as if they never had any to give.

This I had to add. OK, I’m not going to lie, there aren’t so many covers of this, to me, quintessential Dan track, most being facsimiles by either cover bands or piano prodigies performing for their proud parents. But this stood out, even if from the ranks of what I call bedroom gurners, mainly as it seems just so darn smart. Who this fella is, I know little. Here’s what he says, on his YouTube channel: “Tony R. Clef is an American fingerstyle guitar player who specializes in making arrangements of popular songs for the nylon-string acoustic guitar.” You can’t argue with that, really, especially with over 18 million watches for his various clips. He did an album in 2011, Tuesday Afternoon, and it deserves a plug.

Too obvious? Possibly so–tribute band territory’s not usually our pitch–but you gotta admit it, this is pretty darn hot. The arrangement, by design, is postage stamp faithful, given some little tweaks here and there; the pedal steel player drops in a few such that make it worthy the appearance, and the singer has a slightly more attractive tone than Fagen’s own, rendering the song even dreamier than memory remembers the original. (Ed: Even if it were the silken-voiced Palmer who voiced it on Can’t Buy a Thrill!) My reading suggests that the band occupy a pole position in the US body of Dan copyists, with, arguably, Stanley Dee occupying a similar role in the UK. They have the better name, mind.

This is surely allowed, as the non-Scandiphone listener won’t ever realize that while the tune is identical to the original, the lyrics are altogether different. Indeed, such is the coyness with which Secondhandsongs approach the song, I wonder whether this is one of those settled-out-of-court situations where a group of unknowns us an established act for plagiarism, with any legal decision out or court and under wraps. Be that as it may, I notice Becker and Fagen get a writing credit, as do the myriad Danes who comprise this long-established institution, world-famous in Copenhagen. Anyway, this song, let’s call it, came out in 1975, three years after “Change of the Guard,” and it sounds like the Dan would sound as imagined by the writers of the Archies comic book. Quite where the gruff voiced middle bit is coming from, who knows, but it’s, um, different. Shu-Bi-Dua ran between 1973 and 2011 and left a legacy of similar material, with 18 studio albums to their name.

The churlish will accuse me of dredging the ditches here, with another homemade production, but look beneath the slightly gawky veneer, and try to imagine what a good studio wizard could do with this. Or, indeed, with any of the many other Dan covers Celia Nava has put up on her YouTube page. The whisper of a Latino rhythm is bubbling just beneath the surface, and the three girls’ voices gel well. The three girls? OK, I got it, albeit at the second run-through: it is all her, with some clever editing. I am particularly taken with the piano solo, which is a clever mix of the original and her responsive take off from that. All it needs is a good mix and sound balance and I’d buy it.