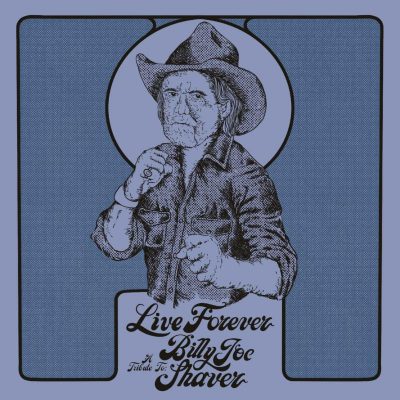 Billie Joe Shaver was one tough dude. The mere fact that he made it to 81 years old is a tribute as much to his constitution as to anything else, because his life and times read as if he wasn’t one much for compromise. Hell, too tough even for the Highwaymen, turning down the opportunity to be a member of that iconic grouping of his peers. As a performer he may not have been as celebrated as Waylon, Willie & Johnny, being very much in the gravel ‘n’ grits school of rough and ready, but his songs have gone right across the board and back again. You just might surprise yourself by how many you recognize on Live Forever: A Tribute to Billie Joe Shaver.

Some brief backstory. Born in 1939, Shaver started his career on discharge from the US Navy, getting a job as a songwriter for hire having made little of other enterprises. Clearly he had something, with Waylon being an early adopter, Shaver penning the bulk of songs for Jennings’ 1973 album Honky Tonk Heroes, leading in turn to his being covered by Elvis Presley and Kris Kristofferson. Signed up by a number of labels, each promptly folded, bad luck over cause and effect, but something Shaver ruefully acknowledged thereafter.

Nonetheless, he still produced an estimable body of work, sufficient to be entered into the Texas Country Music Hall of Fame in 2006, and was always able to surround himself, on record, with the great and the good, they happy to play to the side of him. Even Bob Dylan was a fan, giving him a namecheck in his “I Feel a Change Coming On,” in the same line as James Joyce, no less. And he gets a mention in Dylan’s latest tome, “The Philosophy of Modern Song.” He died of a stroke on October 28, 2020.

To business, and it is old mucker Willie Nelson who first takes his place on the Live Forever stand. He sings “I’m Going To Live Forever” like he means it, a perfect commemoration, the words undoubtedly built to last, this interpreter then channeling the message in flesh. Sounding stronger, even, than on his own recent A Beautiful Time, he is joined by Lucinda Williams for the backing vocals only she can quite provide, and it is a triumphal start, the band (put together by Live Forever‘s producer Charlie Sexton, with Sexton himself joining in on guitar, keyboards and even percussion) an accomplished combo behind them. Co-producer is Shaver’s one-time drummer Freddie Fletcher, later also a producer of Shaver, Nelson and their compadres. Fletcher writes a loving paean to Shaver within the liner notes.

Ryan Bingham lines up to represent the next generation of outlaws, with a rousing “Ride Me Down Easy,” where barroom piano provides a lively bedrock to the message. If “Old Five and Dimers” is arguably Shaver’s best-known song, Rodney Crowell does it proud, erring just far enough from sentimentality to give it a convincing feel, and, for a moment, you may find something in your eye. Sexton’s twin tracked guitars add the gentle sway that draws you in, Emily Gimble’s Wurlitzer another attractive feature. And, yes, she is one of the Texas Gimbles, her grandfather, Johnny, and her father, Dick.

By way of contrast it all next goes bluegrass jangle, for Miranda Lambert’s “I’m Just an Old Chunk of Coal,” which is undeniably a little cheesy. But good cheese, mind, the song built for this sort of show biz hokum, and gives variety to the set. Hell, it even has whistling! Sticking with a female voice, it is none other than Mrs. Paul Simon herself, Edie Brickell, who adds some beautiful polished huskiness to the country waltz of “I Couldn’t Be Me Without You,” a highlight of the recording, with some glorious dobro (Sexton, natch) and the understated upright bass of Glen Fukanaga, a sturdy presence across much this disc.

Which now Nate Rateliff, fresh from his standout presence on Larry Klein’s Leonard Cohen tribute (reviewed here), the chance to exercise his tonsils across “You Asked Me Too.” In truth, dare I say he is a little wasted here, his voice sounding unusually vanilla. I would have liked to hear Raul Malo roped in for this one. Get rid the churchy organ, too; too obvious.

Some Nashville orthodoxy next, from George Strait. The song is the same one Dylan references in his new book, “Willy the Wandering Gypsy and Me,” and he does it proud. I can’t help but feel it a companion song to “Me and Bobby McGee,” and this rendition is the pure unadulterated class of “and western.” Beautiful.

Amanda Shire’s version of “Honky Tonk Heroes,” that title track of the Waylon album that kickstarted Shaver’s career, is a curious beast, her vocal a curious cross between Dolly Parton and Buffy St. Marie. It starts slow and stagy, but a couple of verses later it changes gear into hoedown territory. Her fiddle, of course, is a dream, as is the rollicking guitar provided by husband Jason Isbell. The ever-reliable Micky Raphael also gets to blow some timely harmonica.

I gather some disparagement has come Steve Earle’s way for his “Ain’t No God in Mexico.” Unfairly so, in my opinion; this is a perfectly serviceable rendition that matches his voice to the lyrical direction of flow. Possibly the last we get to hear of him with the Mastersons, Chris and Eleanor (Whitmore), whose playing embellish this track.

The youngest participant in the piece is surely Margo Price, and this participation will certainly do no harm, as she leaps the ladder toward becoming one of the most trusted names in the Americana business. She nails “Ragged Old Truck,” managing to be both old-timey and newfangled all at once. Husband Jeremy Ivey is on hand to add some never more Raphael harmonica, the overall presentation and contribution of the whole band rendering this an exquisite construct. Another highlight: Price’s performance of the line “I may be as ugly as an old mud-rail fence, but I’m loaded with hillbilly charm, that’s right.” She isn’t ugly by any stretch, but that charm is a given.

Willie galumphs back for “Georgia on a Fast Train,” a breakneck wheelspin of a railroad song, which features perhaps one of the last performances of his late sister Bobbie on piano, as well as a seemingly uncredited Raphael and some Western swing guitar that lifts the song’s slightness (relative to the selections elsewhere). The finale comes from Alison Russell, who gives “Tramp on Your Street” a spookily incandescent gospel shiver.  Had anyone thought she was punching above her weight within this august company, well, think again. A stunning closer, this rounds out the record perfectly, and can only further polish Russell’s patina. Glorious, with smoky vocals and a shimmery organ.

That Bobbie Joe Shaver, then. Good, wasn’t he? Go check out some of his own, but Live Forever is certainly something to play and keep, alongside.

4. Miranda Lambert – I’m Just An Old Chunk Of Coal (But I’m Gonna Be A Diamond Someday)

5. Edie Brickell – I Couldn’t Be Me Without You

6. Nathaniel Rateliff – You Asked Me To

7. George Strait – Willy The Wandering Gypsy And Me

12. Allison Russell – Tramp On Your Street