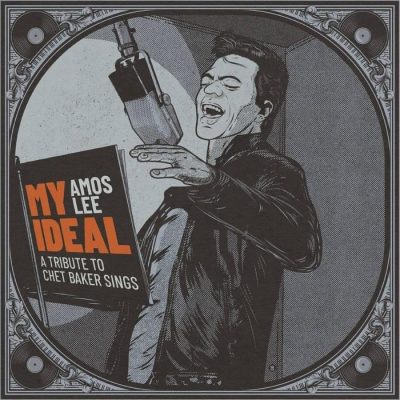 I confess I didn’t quite know how to approach Amos Lee’s My Ideal: A Tribute To Chet Baker Sings–with excitement and delight, or merely admiration. I get that this sounds grudging, but in my book Chet was not only one of the best two jazz trumpeters who ever strode this earth, he was also one of the very best singers. Alas, outside jazz circles, he never quite became the household name he could have been. Rock circles knew him best, perhaps, as the horn player on Elvis Costello’s own original version of “Shipbuilding,” arguably a quarter century past his peak. So anyone who can raise his profile, well, that’s fine by me.

Amos Lee has been around for a while, an associate of Norah Jones, and a purveyor of a bluesy folk hybrid style. That he has recorded his first five recordings for Blue Note might also suggest someone somewhere could hear a hint of something jazzier to his bow. Rather than offer any view to his previous, let’s stick with My Ideal, wherein he deigns to replicate the mood of the album Chet Baker Sings, backed by a trio of Philly’s finest. These comprise David Streim on piano and trumpet, Madison Rast on bass, with Anwar Marshall on the drum seat.

Lee kicks off with “That Old Feeling,” It’s fine, but something just feels wrong. The vocals are too light, the mood too jaunty. It takes the more desolate “It’s Always You” to show off what Lee can do with his voice. His tone may be more molasses than Baker’s, but he hits the right sad spot for this song. Which is rather how all My Ideal goes; Lee adds his distinct nuance to the songs of angst and grief, but comes over karaoke for anything much livelier.

Most will head straight to the songs they know–“My Funny Valentine” and “The Thrill Is Gone,” say. Whilst Lee performs a quite lovely version of the former, the thrill has some difficulty even arriving for the latter. It hits all the right notes, in the right order, but it is all a bit, shhhhh, dull. To be fair, part the issue is the acetate honed precision of the backing. Ever so orthodox, it could come from any upmarket jazz club trio, filling in the time ahead the main attraction. Lee has a decent voice, but he would have done Baker a fair fewer favors by trying to update the arrangements a bit. Or to at least remove the whiff of tuxedos and cigars, because, even when he gets close, he is still a mile off the wracked anguish that only Baker could exude so effortlessly. Through, one might imagine, experience.

Highlights for the Baker-naive include “I Get Along Without You Very Well” and “Everything Happens To Me,” as well as “Valentine” and “It’s Always You.” But, you know what, if you are looking at this, cut out the middle man and stick with the real deal. The 1956 re-release of Chet Baker Sings carries the same tracks in the same order to better effect. OK, there are two extra tracks added to My Ideal, but that isn’t enough. Sorry.

My Ideal tracklisting (all songs previously sung by Chet Baker)

5. I’ve Never Been In Love Before

9. I Get Along Without You Very Well

10. My Funny Valentine (For Oskar and Eli)

11. There Will Never Be Another You

14. Look For The Silver Lining

15. Everything Happens To Me