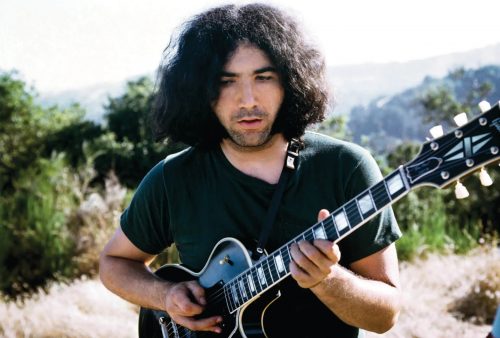 Whatever you think or don’t think of the Grateful Dead, we have to credit the songwriting team of Jerry Garcia and lyricist Robert Hunter for turning out some indelible classics. As long as there are acoustic guitars to strum and humans to sing, “Ripple” will ring out, and “Friend of the Devil” too. These songs have osmosed into the folk tradition that gave rise to them.

I’m not going to make the same claim of timelessness for “Bird Song,” Garcia and Hunter’s elegy to their friend Janis Joplin. Its greatness is of a different kind. But as far as elegies go, it has very few peers and is worth attention.

Joplin was in the Dead’s innermost circle for years, tight with the band despite chaotic lifestyles and the disorientations of stardom. A secret footpath connected Joplin’s house in northern California to the house Garcia and Hunter shared in the same town (I mean an actual footpath, not a metaphorical one). A few months before her death, Joplin, Garcia, and Hunter–with a flock of other musicians–embarked on an epic train ride across most of Canada (see the film documentary Festival Express). Hunter wrote “Ripple,” in fact, during that long strange trip. The train ride ended early in summer, and by fall Janis herself was gone. Garcia and Hunter began work on “Bird Song” just a couple of months later, around the time that Joplin’s final album, Pearl, was posthumously released, and the hit single “Me and Bobby McGee” poured out of every radio.

Of the people who know and love “Bird Song,” how many know or care about the Joplin connection? Probably not that many. Listeners respond primarily to a song’s mood and groove. They care about the quality of the singing voice, but not the words the singer sings, or the meaning those words carry. And after all, “Bird Song” offers no obvious clue that it is about a death, let alone the death of a friend, let alone a famous friend with a famously tragic fate. Elegies tend to be theatrical and obvious, but this one is hesitant, enigmatic, circumspect.

Hunter’s opening verse has a zen koan quality, with its mischievous mistrust of words and thoughts:

All I know is something like a bird within her sang
All I know she sang a little while and then flew on
Tell me all that you know, I’ll show you
Snow and rain

Snow and rain are elemental realities, trustworthy for that reason. All else is vanity–words especially. Notice the parallels to “Ripple,” a song that is self-conscious and dubious towards its own language. “The thoughts are broken / Perhaps they’re better left unsung” is one of its more pointed lines. In the face of grief and loss, finding words that don’t have a Hallmark card’s hollowness is a challenge. And for the human mind to resolve the existential questions around mortality is impossible.

If the words to “Bird Song” were left unsung, you’d still have the music itself to fill the air. Most versions begin with Garcia’s fluttering guitar theme. It repeats itself a cycle or two before Garcia begins to sing. The vocal melody follows a flight path similar to the guitar line, though the vocal line continues its ascent where the guitar theme climbs back down a step. The vocal line ends where the guitar theme begins, and vice versa. After a second verse, the bridge adds musical churn and vocal harmonies.

The band shaped and arranged these elements into a fairly stellar jam vehicle, a platform for extended improvisation. It took time, and the iterating and tinkering occurred live on stage. (The Dead never released a studio version of “Bird Song.” It debuted on Garcia, the guitarist’s first solo album.) “Bird Song” took awhile to fledge–in fact it went on an extended hiatus from live performance for most of the 70s. When it came soaring back in the 80s, it settled in for the rest of the Dead’s run, until Garcia’s death in 1995.

“Bird Song” is still flying to this day. It features in various Grateful Dead spin-off projects–Bob Weir plays it, as does Phil Lesh. Lesh changes the pronoun in the song from “her” to “him,” remaking “Bird Song” into an elegy for the writer of the elegy.

And then there are the cover versions that keep the song going:

Classically-trained pianist Holly Bowling recorded an entire album of instrumental Dead covers–I’m assuming they are all instrumental, anyway, given the album title: Better Left Unsung. Bowling’s reworkings have been well-received by deadheads and former Dead members alike, though her renderings can be idiosyncratic. If you had any doubt that Bowling is a full-on Deadhead herself, notice that in at least one song Bowling specifies which particular live iteration of the song she is interpreting: “Eyes of the World (6/18/1974, Louisville, KY).” That’s deadication for you.

Bowling takes an understated approach to the understatement that is “Bird Song.” With delicate softened notes she articulates the “tell me all that you know” phrase of the song, in contrast to her more assertive playing elsewhere. She declines to build up drama with repetition, and she side-steps the whole tension and release dynamic. Though it’s a six-and-a-half minute piece, her cover feels more like a brief fling than a drawn-out affair. Even Bowling’s closing move is anti-climactic, an exceptionally pretty and bird-like passage that leaves you wanting another listen.

The usual recipe for a good Dead cover is to stir up heaps of shredding and noodling on various fretboards and keyboards, and add drums and percussion to taste. But T Sisters have more to offer than just that. With three gifted vocalists, all sisters, the band takes the song lyric on a richly harmonious spin. For once we have a Dead cover in which the instrumental solo, deft as it is, serves as a side dish and vocal harmonies are the main course. The Dead always struggled with vocal harmonies. They once persuaded Crosby, Stills, and Nash to coach them through a tricky vocal arrangement (“Uncle John’s Band”), but mostly the Dead were helpless and hopeless at this facet of their work.  In a sense the T Sisters go directly into the weakest dimension of the Dead’s aesthetic and they restore strength and flavor to it. Delicious.

Unless you are celebrating the Baroque period or in Celtic music setting, putting a stringed harp at center stage seems like a dicey proposition. Exceptions to the rule are few in number (indie folk star Joanna Newsom and jazz-harpist Dorothy Ashby come to mind immediately). Here we have new rule breaker in singer and harpist Mikaela Davis. In fact she takes things a step further by pairing her harp with a pedal steel guitarist. The pairing seems, on paper, intriguing but not promising; in reality it works, at least in this magical performance of “Bird Song.”

Davis’s take is nearly three times the length of the other covers in our line-up. Yet the duration doesn’t lead to dilution–the instrumental interplay sustains interest throughout. It’s all about the ensemble, the collective mind-meld they establish. Shane McCarthy on bass guitar may be the secret sauce here, with his perfection of tone, timing and feel. Of course it helps that Davis sings beautifully. As an instrumentalist she offers up surprises, such as string bends (I didn’t know that was possible with a harp). Her bent notes bring in the flavor of ancient China or Japan–the harp momentarily sounds like a koto (or some other exotic plucked instrument that isn’t a harp). To sum up this performance with one word: Ethereal.