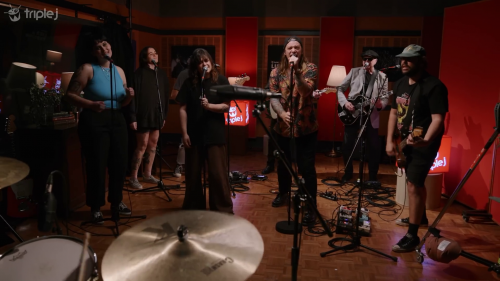 For a recent iteration of Triple J’s Like a version series, Aussie indie-rockers Dune Rats covered one of Australia’s all time best punk songs “Am I Ever Gonna See Your Face Again” by the Angels.

Joining them in covering this are a number of well known friends: vocalist Anna from Teen Jesus and the Jean Teasers, singer-songwriter Ruby Fields, guitarist Jackson from Beddy Rays, vocalist Kelly from TOTTY, and to make it even more special, John and Rick Brewster, members of The Angels.

The band said of having the original members of The Angels on the track “It was good, as it made us not want to fuck it up.” And it’s this Aussie spirit that permeates the track. The band move through the track at a clip, quickening up the pace and highlighting the harmonies from all of the talented vocalists on show.

But the special part (especially for Aussie fans) is in the second half of the cover. When this song is performed live, or even over the radio (at any time of day) the fan-added refrain of “NO WAY. GET FUCKED. FUCK OFF” echoes throughout the venue. Dune Rats smartly integrate this into the track, with everyone screaming it into the microphones with gusto.

This track is not only a great cover, it’s a fantastic display of the passing of the baton from the old classic rockers The Angels onto a new generation of punk rock superstars.