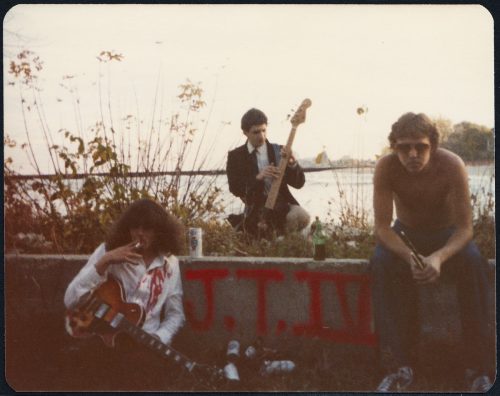 J.T. IV aka John Henry Timmis was a Chicago-based punk musician active in the 1980s. He released only a smattering of music during his lifetime (and an extremely long film) that was collected for a posthumous re-release in 2008. However, a recent discovery of a tape has produced a second album, to be released in January 2023. One track on this brand new release is his cover of Brian Eno’s “The Fat Lady of Limbourg.”

For a brief period in the mid 1970s, Eno was one of the great art rock musicians. For anyone who knows Eno only as a producer of famous bands or as an ambient musician, that might seem a little strange. But it’s true: he released a number of classic art rock solo records after his departure from Roxy Music but before Ambient 1. “The Fat Lady of Limbourg” is from the second of those records, Taking Tiger Mountain (By Strategy). Like most of Eno’s music from this period, “The Fat Lady of Limbourg” has a lot going on in its mix. It’s sparser than most of his art rock tracks, but it’s still relatively dense, with multiple keyboard, guitar and percussion parts, and its classic horn part.

J.T. IV takes a much more primitive approach, as you would expect from an outsider punk musician. Though his voice mostly mimics Eno’s, the rest of the track is quite distinct: slide guitar, a drum machine, and a bass guitar. J.T.IV mimic’s Eno’s throbbing organ with his guitar and the thing sounds almost out of time with his vocal. The pace is upped a bit too, but the frantic nature of the guitar part makes it feel much faster, and like the song will fall off a cliff. For the horn part, J.T.IV just uses the same guitar.

It’s a primitive, manic and fun cover of a unheralded Brian Eno classic. Listen below: