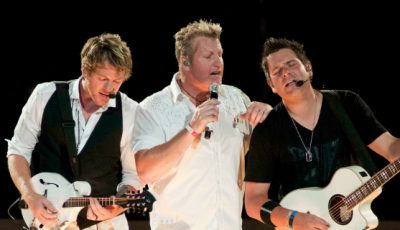 Marcus Hummon, along with Nitty Gritty Dirt Band’s Jeff Hanna and Bobby Boyd, was one of the original songwriters of “Bless the Broken Road.” The song first appeared on the Nitty Gritty Dirt Band’s Acoustic album in 1994. What else is featured on the album that the original “Bless the Broken Road” calls home? A song called “Sarah In the Summer.” I can’t make this up; it’s fate!

A year after Nitty Gritty Dirt Band first released the song, Hummon covered the song himself on his debut album, this time with Hanna as one of the backup vocalists. There were actually many more covers to come, no fewer than six according to Wikipedia, including one by Melodie Crittenden. Her 1998 version had the additional honor of being featured on an episode of Dawson’s Creek. The original is piano forward, and the approach is very fitting for an album titled Acoustic. The song is simple; one voice and one classical piano, both earnest. These are supported by subtle mandolin and a harmonica, heard faintly at first, and then swelling to a solo flourish.

Then came Rascal Flatts and their Feels Like Today album, released in 2004. Their version went on to win a Grammy for Best Country Song. What made this version strike a chord with so many more people? It isn’t because of any dramatic changes to the song. The piano opening remains; a banjo still plays an important role. There is a fuller sound, and the occasional guitar solo does build to particular emphasis on lines like “and now I’m just a-rollin’ home.” The Rascal Flatts magic just helped the song reach the right audience at a poignant time.

Now we’ll chase a hopeful song with a sad one. “What Hurts the Most” also was released three times before Rascal Flatts took it on in 2006. Mark Wills kicked things off in 2003, and then Bellefire released the first cover in 2004, followed by Jo O’Meara in 2005. In this original version, orchestral sounds feature prominently, and the sound ebbs and flows with the emotion of the song. It’s a simple delivery, full of feeling. Shoutout to songwriters Steve Robson and Jeffrey Steele for packing such an emotional punch into the lyrics.

After Feels Like Today, an album that has gone multiplatinum, came Me & My Gang, which, not to be out done, also went multiplatinum. Rascal Flatts was on a roll by now; both albums hit number one not just on the country album list, but on the overall Billboard 200, making their crossover to the mainstream complete. We hear more a change from the original in this one. There is a little more syncopation, a start/stop rhythm in the words leading up to the chorus. A banjo remains, no matter what popularity the band may have gotten so far to this point, they are still true to their country roots. Important elements of the song remain like the violin melody and the dramatic pause where the music drops out right before the “so close” towards the end. Classical strings are swapped for electric guitar, and with the guitar interludes paired with vocal runs, Gary LeVox showing off his power, the song opens up for the listeners to take a deep breath before diving back into the painful storyline. I am biased, but there is more feeling in the delivery in this version. Supporting vocals and the story within the music video help escalate the emotion as well.

As I was preparing for this “That’s A Cover?” double feature, I made my way back through the band’s discography. The memories (and the lyrics) came flooding back. Covers or no covers, “Here’s to You,” Rascal Flatts, for giving fans 20 years of joy!