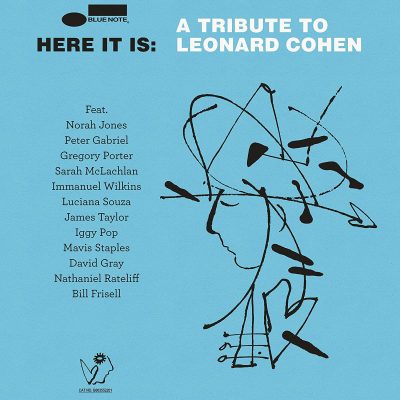 Having spent a fair amount of time covering Cohen songs for other artists, Klein came up with the idea of assembling an album’s worth of new ones. He brought together a collection of his contacts and acquaintances, largely from the jazz world, or, as he himself put it: “a group of the most prescient and forward-looking musicians.” Thus the band here, which is led by unassuming guitar titan Bill Frisell, includes also saxman Immanuel Wilkins, Kevin Hays on piano, and the rhythm section of bassist Scott Colley and drummer Nate Smith. Longtime Frisell associate and pedal steel player to the stars Greg Leisz also gets to play, as does Larry Goldings. So a crack band, and already catnip to the Blue Note label, even ahead the roll call of vocalists.

Norah Jones opens Here It Is with “Steer Your Way,” setting the bar high from the start. A late-blooming nugget from 2016’s You Want It Darker, Jones gives it her idiosyncratic husky purr. The rhythm section burbles pleasantly in the background, with Wilkins blowing smoke rings of alto all around her voice.

That sense of sophistication spills over into the title track, another late-period Cohen song; it’s good to see the selection covering the full range of his career. Peter Gabriel takes to “Here It Is” as if his own. With very little of his vocal cracks and fissures, sung straight, it is hypnotic and mesmerizing. If a criticism of later Cohen is evident, it is sometimes that his vocals tended more to intonation, even if by necessity. Even at a lower and echoed register, Gabriel is undeniably singing the stark narrative/warning. It’s a difference, and I think the song’s better for it.

My bad, I have a beef about Gregory Porter. I have a prejudice against his ubiquity whenever someone needs an air of seriousness within a project. Too, he often serves as the token jazzman amongst the lightweights he gets usually paired with. As he is, relatively, the lightweight here himself, I was prepared to give him an new ear. And I guess something less, um, obvious than “Suzanne” might have had a better chance. OK, he can sing, but it is all a bit straight, however much Colley’s bass tries to add some life to it. Maybe it’s the song; just too well known. Not for me, then.

Which I felt might then make Sarah McLachlan’s task well nigh impossible, given she drew the short straw of “Hallelujah.” But by bathing it in a New Age-y Celtic arrangement, and with her voice veering more to the delicate than the strident often adopted by lesser singers, aided by Hay’s delicate piano and Colley’s bass, she cracks it. It even manages to erase the memory of some of the worst excesses granted this–and don’t you forget it–terrific song. (This seems the moment to raise the specter of one voice I would like to have heard on this record, given the arrangements are not so very different from his own Celtic new age meanderings, one Ivan George Morrison. Volume Two, maybe?)

“Avalanche” gets a purely instrumental going over, and a good one. Over jittery drums and a throbbing bass, Wilkins blows a faltering breeze over Hays’s piano, at least as it starts. The beginnings of clouds collect in the sky, as the rhythm section amp up the brewing storm. The band doesn’t wast the opportunity to step out, making for a good cleanse of the palate. (Mind you, with Cohen having accused Nick Cave, in his vocal version, of having butchered the song, maybe nobody was prepared to risk that wrath, even beyond the grave!) Back on the territory of songs maybe just that much too well known, it is the relatively unknown Brazilian singer Luciana Souza who gets to tackle “Hey, That’s No Way To Say Goodbye.” The players imbue the song with the merest hint of samba; it’s fine, but a touch too supper club.

By comparison, the slow, bluesy rendition of “Coming Back To You” works better than our earlier listen. Taylor ladles in more emotion than he often has too, it succeeding in showing a lighter and more sensitive side to Sweet Baby James, less reliant only on his dark brown tones. He hasn’t sounded this involved in years. The organ and steel are an effective ballast to maintain this belief.

Is there a tribute album that Iggy Pop isn’t on these days? So here, as ever, up he pops. You might think “You Want It Darker” as being ideal for his persona and you wouldn’t be wrong, but he can’t give it anything the writer hadn’t, their voices (Cohen then, Osterberg now) being much the same. I guess his name helps widen the demographic appeal of the project. Luckily, Mavis Staples is on hand, widening it, to be fair, still further, to give a spookily stunning rendition of “If It Be Your Will,” like an old testament prophet(ess), leaving this listener all a-goosebumpy. Again, a heady whiff of Van’s Avalon Sunset period in the sax, and it is glorious.

I wasn’t sure David Gray was that big on covers, but it seems he’s done his fair share. Here he delivers one of the highlights, a searching version of “Seems So Long Ago, Nancy.” One of Cohen’s more chilling tales of despair, it wracks up the angst mercilessly, Gray’s voice an anguished near-wail. Once more it is Colley that seems to take up most of the heavy lifting in the backing, although Frisell’s spiky shards add to the frissons evoked. (Nancy? Cohen’s aunt.)

We then go from one belter to another, as Nathaniel Rateliff’s rightly applauded “Famous Blue Raincoat” follows. It’s a masterclass in phrasing; I am uncertain if Rateliff has ever exerted this much control over a lyric. His delivery here is heartrending and, simultaneously, so matter of fact and accepting. An astonishing performance. I can’t help but feel it is the rock and soul artists coming off better in this setting?

Which might be a good place to acknowledge the part of Frisell, who takes credit for This Is It‘s closer, an instrumental version of “Bird On A Wire.” And to exclude him from any critique inferred, as none meant insofar as the musicians featured. Frisell has long shown himself to be a consummate interpreter of all forms of music, whether his own body or work or from writers as varied as Brain Wilson and the Lennon/McCartney songbook, always finding something new to say. His “Bird” is the perfect bookend to this project, a nuanced version that is chock full of nostalgic reverie around the original, encompassing also any amount of reflection around the whole of Cohen’s legacy. Which is cleverer than it sounds, a classy epilogue.

Overall, Klein has done good and can be congratulated for this collection. The lapses into an autopilot perception of mainstream acceptable jazz are few, and the arrangements are sympathetic and supportive to artists, and listeners, less familiar therewith. Any chance of a Here It Is Vol. 2, Mr. Blue Note?

Here It Is Tracklisting: