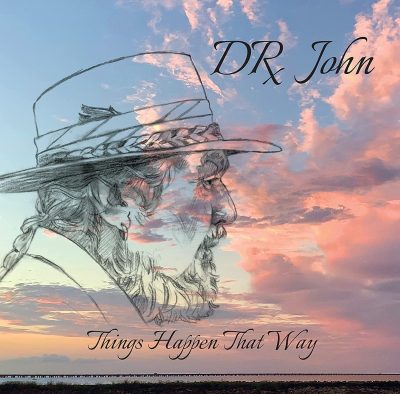 Anyhoo, with no further ado, what’s Things Happen That Way like?

Opening with the bona fide classic, “Funny How Time Slips Away” is certainly going to be setting the bar high. Willie Nelson’s classic has been covered by innumerable equally iconic singers, from Elvis Presley to Al Green. A glorious one, two, t’ree, four and it’s just the good Doctor, his characteristic piano and drawl taking the first verse before some choogling organ, some horns and the rhythm section kick in. With cooing backing vocals, this, in other hands, could sound like a supper club, such is the laid-back jazzy vibe. But the standard of the playing, together with that voice, takes it to another level, a casual and cocksure swagger bubbling throughout a superlative rendition.

Next up is a Hank Williams song; no pressure, as they say. His “Ramblin’ Man” came out in 1951 and has nothing to do with the Allman Brothers song at all. A bleak and swampy arrangement from the start, with choppy piano and wondrous slide guitar, Rebennack sounds every inch the world-weary itinerant, forever on the road or a freight train. We don’t get any yodel, but it is a second surefire stunner.

The oldest song here, “Gimme That Old Time Religion,” dates from the late 1800s, a staple of Church services across the black/white divide, although of earlier negro spiritual origin. One has to wonder whether this reflects on Rebennack’s childhood, and he takes it respectfully, bringing in old pal Willie Nelson to join in with him. The song carries a distinctly Louisiana feel to it here, and the two old friends sound, as they hoof and gurn their way through it, like they are channeling Statler and Waldorf. And I mean that in a good way. With the utmost respect. Honestly.

Next we get next-generation Nelson for the aforementioned “…Gilded Splinters.” Risking the wrath of our rule book, I am going to comment on this, despite it not being, as such, a cover. It is certainly a whole lot different from the original. True, Rebennack’s vocal strays little from his original template, but the arrangement built he’s around it is pure Southern Cal. Lukas and his band, Promise Of The Real, apply perhaps the most “modern” sound here, the most rock-related, the guitars and (I think) steel weighted down by a solid bass that lopes decisively through the track. If anything, it seems too little about the singer/author of the song, too much about the additional players. I’d prefer it on a PotR album, featuring Dr. John, if you catch my drift.

More Hank follows, the most celebrated piece of that artist’s legacy, “I’m So Lonesome I Could Cry.” His voice in a lower register than I ever recall, Rebennack growls through this with aplomb. The backing nails 1950/60’s Nashville and it is marvelous. As different as can possibly be from the rendition by Cowboy Junkies, it occupies a similar space and purity of essence. From that sublimity follows “End Of The Line,” yes, that one, and the last song I expected here. Indeed, so out of context it is, it was initially difficult to quite recall where and why it was so well known. Aaron Neville is on hand to add his vocals, the two voices contrasting deliciously. Transformed into a marching band shuffle, funkier than the Wilburys could ever manage, it is a pleasing surprise, all the more as Katie Pruitt then adds her voice to the mix.

“Holy Water,” “Sleeping Dogs Best Left Alone” and “Give Myself A Good Talkin’ To” are all new songs, written during the years of making, especially for this record. As such, they are not really our remit, suffice to say they are each decent enough songs, typical of Dr. John’s style, at least lyrically, if with the C&W inflections at least nodded in the direction toward. “Holy Water” sounds like a great lost song by The Band, whereas “Sleeping Dogs…” is more of a generic Mac by numbers. “Talking To” won’t, likewise, ever figure in his top 10, but has nice electric piano. I’d like to have heard that played with just solo piano, the confessional style perhaps better suited such a presentation.

Which only leaves the song that, in part, gives the project its name, Cowboy Jack Clement’s “Guess Things Happen That Way,” taken to number one by Johnny Cash in 1958. Stripping it back to the core, Dr. John excises all the inherent cheesiness, transforming it into a wistful lament. His vocals sound as clearly fading as was his heart, the regret he teases into the words really quite moving and a wonderful close to this pretty special record, which makes for quite the epitaph.

Throw aside any lingering prejudices around the style of music embraced. Things Happen That Way isn’t so different from much of Dr. John’s normal fare. It demonstrates he was as much a historian of musical styles as an originator, always able to find a bit of gumbo, whatever the source. Hell, if you even don’t like Dr. John, give it a go. You might just find out you do. Things happen that way.