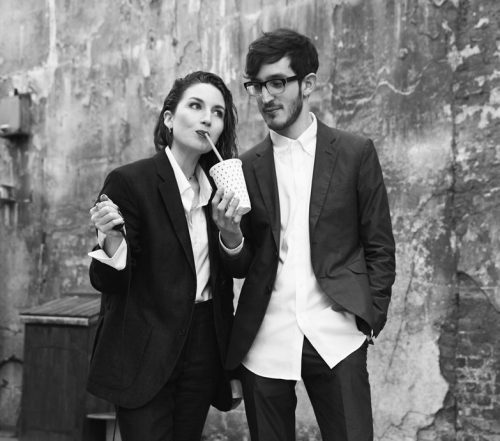 British indie pop duo Summer Camp are saying farewell. Comprised of married musicians Jeremy Warmsley and Elizabeth Sankey, Summer Camp have released three full-length records across nearly a decade and a half of making music together. (As a testament to the duo’s longevity, the last time that the pair were properly featured in our pages here at Cover Me was in 2010, spotlighting their charming holiday compilation cover of The Waitresses’ “Christmas Wrapping.”) To mark their graceful exit, Summer Camp have re-released the very first piece of music that they ever recorded: a cover of The Flamingos’ classic “I Only Have Eyes For You.”

The original Flamingos cut is instantly recognizable for its “shoo-bop shoo-bop” hook and slow dance reverie. But Summer Camp take a knife to the tune, slicing it open and excavating the track’s insides. Cascading Casio chords drip down the left side of the stereo, while a drum machine on overdrive and a distant tambourine clatter around in the right. Sankey’s somewhere in the middle, serenading from the void. Summer Camp’s version was recorded back in 2009 for a lark to post on Myspace and, in the best way possible, it shows: the cover has a reckless, blissful energy, the sound of two young artists messing around with nothing to lose.

Beyond its significance as the duo’s first recording, “I Only Have Eyes For You” also unwittingly foretold some of Warmsley and Sankey’s own long arc together. As the pair elaborated in a recent band newsletter:

“In October 2009 when Jeremy was on tour with a solo album, Elizabeth made him a playlist that included one of her favourite songs, ‘I Only Have Eyes For You.’ A few weeks later we decided to record a cover of the song, just for fun. We were proud of it so we put it on Myspace with a fake bio saying we were 7 friends from Sweden who met at summer camp. 13 years later we have released 4 albums, played gigs all over the world, met so many wonderful people, got married and had a son.”

Summer Camp will perform one more farewell show in London this September. Check out their cover of The Flamingos’ “I Only Have Eyes For You” below.

Check out more “I Only Have Eyes for You” covers here.