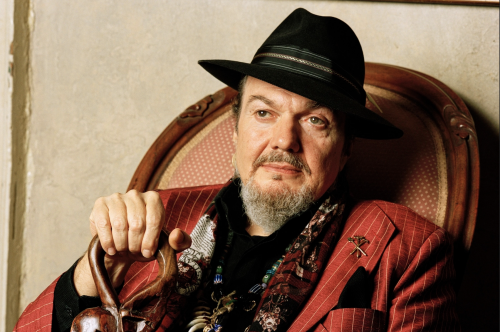 The late Dr. John released over 30 records in his lifetime, but the legendary pianist still has one more yet to share. Things Happen That Way is the posthumous new album from Dr. John, due out September 23 from Rounder Records. Produced by guitarist Shane Theriot and Dr. John and executive produced by Karla R. Pratt—Dr. John’s daughter—Things Happen That Way features a couple of brand-new Dr. John tunes that reflect on his decades of high-wire living. But the record’s big focus is its handful of cover tunes, taking inspiration from Louisiana Hayride and Dr. John’s favorite country (and country-adjacent) legends. In the thick of the record’s musical gumbo, we’ve got a cover of the Traveling Wilburys’ “End of the Line,” featuring Aaron Neville and singer-songwriter Katie Pruitt. It’s glorious.

Dr. John takes the tempo way back for this version, transforming the song’s frenzied train beat into a slow-simmering shuffle. Roy Orbison and Jeff Lynne brought a kind of exultant gospel fervor to the hook on the original, but Dr. John, Neville and Pruitt’s take is lowdown and easygoing. It feels like a muggy New Orleans afternoon, drifting around at its own lackadaisical pace. The song—and, specifically, its iconic “It’s aaaaaaalright” mantra-hook—becomes a kind of ode to the distinctly NOLA way of living that Dr. John embodied, even from afar: keeping things loose, rolling on in spite of the weight of the world. Dr. John may have left at the wrong time in 2019, he’s still in the right place with this one.

Things Happen That Way will also feature covers of Hank Williams and Johnny Cash, among others, when it’s fully released next month. In the meantime, check out the Traveling Wilburys cover below.