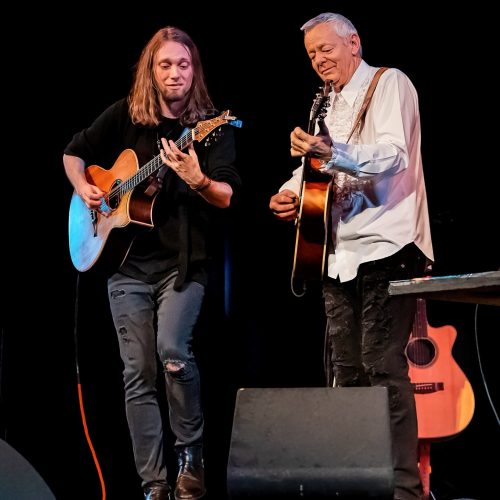 Mike Dawes is a finger-style guitarist who has become rather legendary for his performances on YouTube, some of which we’ve written up here. Tommy Emmanuel is a legendary Australian acoustic guitarist from an earlier generation, known for both his finger-picking and his playing with a pick. They’ve joined together for Emmanuel’s latest Accomplice series, Vol. 3.

On their version of Nirvana‘s “Smells Like Teen Spirit,” Dawes takes the rhythm parts and Emmanuel mostly takes lead (using a pick). It’s an instrumental cover punctuated by Emmanuel randomly shouting out lyrics when he’s particularly excited. Though they both play acoustic guitars, the cover is rambunctious and full of energy. Just over two and a half minutes into the song, they jam it out and take it into a new place.

Though there isn’t a distortion pedal in sight, it’s a fitting tribute to the energy and exuberance and rough-edged nature of grunge, which captivated so many people 30 years ago.