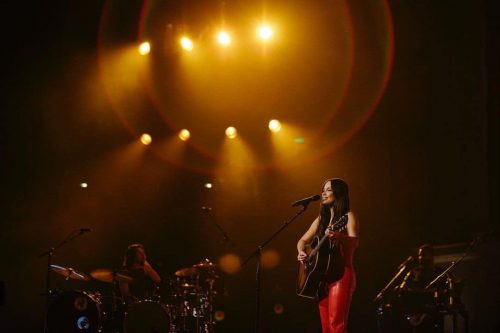 Now that Elvis is in theatres, we are making our way through the covers that litter the soundtrack. One of the highlights is American country singer Kacey Musgraves’ version of “Can’t Help Falling in Love.”

“Can’t Help Falling in Love” is one of Elvis’s most covered songs, but is actually a cover itself, or an adaptation anyway, of the 18th century French popular song “Plaisir d’amour” (later orchestrated by Berlioz). For Kacey’s cover, she goes completely minimalist, just her voice and a piano. The piano is so closely miked you can hear its mechanisms, including what sounds like Musgraves’ feet moving from pedal to pedal. Musgraves’ vocal is mostly conventional, going for the emotional resonance of the lyrics, but she allows a little idiosyncrasy to creep in, especially when she sings “Darling, so it goes/Some things are meant to be.” It’s a simple, very pretty version of the song that highlights its enduring appeal.