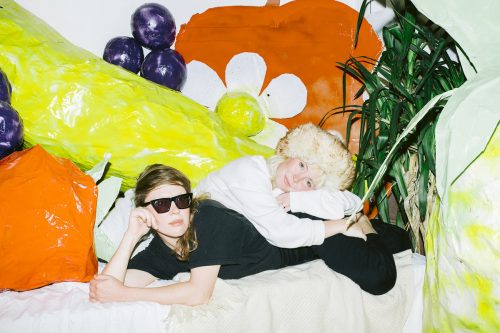 The A’s are a new collaboration between Amelia Meath of Sylvan Esso and Alexandra Sauser-Monig of Daughters of Swords. The pair have already made music together as two-thirds of another close harmony-focused act, Mountain Man. But for the A’s debut album—Fruit, set to be released on July 15th, the focus is exclusively on cover tunes. Accompanying the album and overall project A’s announcement is a surreal take on “He Needs Me,” written by Harry Nilsson and performed initially by Shelley Duvall as Olive Oyl in Popeye.

Given its quirky pedigree and American Songbook-gone-askew stylings, “He Needs Me” is surprisingly uncharted territory as a cover pick. With little precedent beyond the original film (and Shelley Duvall’s iconic caricature performance), the A’s take “He Needs Me” to impressively bizarre extremes. The song’s arrangement — extremely close-mic-ed snare brushes, bizarre jowl slaps, Ribot-ian guitar chops, jagged string lines, airy harmonies — pays tribute to the original, but feels far more peculiar and microscopic in its focus, moving with the artful and effortless machinations of a tightly-wound watch. An accompanying hyper-stylized video, featuring Meath and Sauser-Monig in trippy tableaus of deadpan gazes and slow-dancing flowers, offers a fittingly bizarre visual reverie. It’s a kind of fever dream version of Olive Oyl’s id, perhaps, transformed into slow-dripping Surrealist art-pop.

The A’s forthcoming Fruit will feature a number of other esoteric covers: “lullabies and love songs… traditional ballads,” and an album closer that’s a “multiplying song about frogs and nature,” as the band put it. Check out the video for the A’s cover of “He Needs Me” below, and pre-order Fruit here.