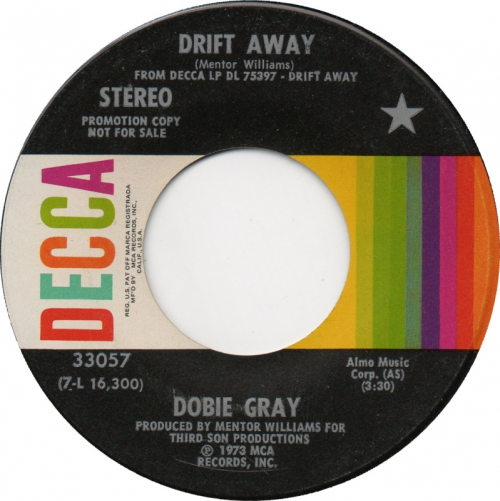 Comedian Marc Maron made a funny mistake on a recent episode of his “WTF” podcast. Two founders of the Doobie Brothers were his guests. Although Maron is fanatical about music and is a musician in his own right, his tone throughout the interview seemed to reveal that he finds the Doobie Brothers faintly ridiculous. (He’s more of an Iggy Pop and Patti Smith guy.) Sure, Maron could recall a few of the Doobies album titles, and he shared a memory of singing along with “Black Water” in a school bus at age 11, but every American of Maron’s generation remembers singing that song in a school bus.

After the interview, Maron improvised a medley of iconic Doobie Brothers moments. He sang some choruses he only partly remembered, and he vocally mimicked a few of the band’s signature guitar riffs. Partway through he sang “give me the beat boys, free my soul, I wanna get lost in your rock and roll and drift away,” an iconic ’70s line if ever there was one.

That’s the mistake that got me thinking about the song “Drift Away.” That’s the song Maron was remembering, but it’s one which the Doobie Brothers never recorded. Soul singer Dobie Gray recorded the hit in 1973.

Maron’s not alone in confusing his Dobies and Doobies–just search “Drift Away” on YouTube. At least he got the words right–many think the line goes “Give me the Beach Boys, free my soul…”. Or even, according to Dobie Gray, “Give me the meatballs…”.

Gray’s hit–-or at least its hook-–became lodged in the brains of boomers and older Gen-Xers when it first hit. Younger Gen-Xers and later Gens more likely know the equally-popular cover released in 2003 by Uncle Kracker. His rendition featured Dobie Gray himself singing lead on the bridge and backing vocals throughout; it must have surprised Gray to be back in the bestseller list after a three-decade absence.

Regional differences can be as important as generational ones when it comes to which covers land with a given audience. Listeners in the UK are most likely to know only one version: Michael Bolton’s remake from 1992. In the American South, Narvel Felts’ cover hit it big in country charts within months of Gray’s single coming out. Felts changed the iconic line to “I wanna get lost in your country song and drift away.” And that’s the way Dolly Parton tried to sing it on her television show back in 1977.

Some fans of the song may have discovered it via the character Andy Bernard on The Office, as played by Ed Helms. (It’s strange that Andy’s musical moments on The Office are so hilarious, when after all Helms’ singing is so on target. Maybe that’s the joke–his impeccable ear and well-trained voice delivers the goods, while his demeanor conveys nothing but Andy’s insufferable self-regard.)

Other notable “Drift Away” covers include those by Bon Jovi, Bruce Springsteen, Waylon Jennings, and Ringo Starr with Tom Petty and Alanis Morrisette. The Rolling Stones recorded the song back in 1974, but withheld it from official release until 2021.

But of course the Dobie Gray version is not the original version. Most sources (including the song’s Wikipedia page), claim John Henry Kurtz made the first recording of “Drift Away” in November 1972. It came out on Kurtz’s one and only LP, Reunion.

Yet there seems to have been an even earlier version. Mike Berry released his interpretation in the UK two months before the Kurtz recording. Maybe Berry’s version came out only in the UK, and this accounts for why it seems to be overlooked or disregarded in most discussions of the song’s origins. Berry titled his album Drift Away (as did Dobie Gray a year later).

A good guess is that Dobie Gray heard the Kurtz recording if he heard any version at all. The two treatments are similar; Gray’s interpretation probably caught on because his singing is far more soulful than Kurtz’s (and his guitar player is better, too). Or maybe Gray just had luck on his side. In any case, he soon had a hit on his hands, while Kurtz’s perfectly adequate take went nowhere.

The odd thing is that so many great session players contributed to Kurtz’s little-known album. Kenny Loggins, Jim Gordon, and Larry Knechtel were all on board. So was Jeff “Skunk” Baxter (who later joined the Doobie Brothers). Talent like that suggests the label had high hopes for John Henry Kurtz. Too bad the rest of Kurtz’s musical career was basically non-existent. His recordings are not available on the main streaming platforms. No entry for John Henry Kurtz exists on Wikipedia. But his tale is not a sad one: John Henry moved on to acting, announcing, and voice-over work instead; he became one of the world’s foremost collectors of American Civil War artifacts.

Mike Berry and John Henry Kurtz have more in common than being early adopters of “Drift Away.” Both men had noteworthy support players; Berry had Maurice Gibb playing bass on his Drift Away album, and prior to that he had Ritchie Blackmore on guitar (in a British band called The Outlaws). Also, both achieved success when they turned to acting, and both fell into musical obscurity. (In fairness, Berry had a most interesting run during the ’60s, and is still trying to make a go of it. His web page is worth a visit.)

Finally, we have to talk about the song’s composer. Mentor Williams is another relative unknown–at least if you compare him to his older brother, Paul Williams. Paul Williams wrote or co-wrote many major hits for major acts (The Carpenters, Three Dog Night, and Barbara Streisand). He also earned sainthood by penning “Rainbow Connection” for The Muppet Movie. (As a side note, there’s a banjo-driven remake of “Rainbow Connection,” sung in falsetto, by Andy Bernard/Ed Helms. Just saying.)

If Mentor got mentoring from his older brother Paul, he wasn’t paying close attention. Mentor didn’t come up with another winner until 1984 (Alabama’s “When We Make Love”). But hit songs aren’t everything. Mentor’s greatest success was producing records for various major labels. In fact, he produced the Dobie Gray album Drift Away, on which we find the definitive version of “Drift Away.” Which brings up the possibility that Mentor taught Dobie Gray the song directly. In which case, one can make the argument that Gray’s version of “Drift Away” is not a cover after all. It’s a little unclear.

What is clear is that the Doobie Brothers didn’t do it.