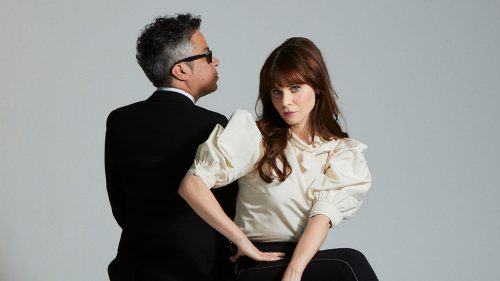 She & Him, the ever-rolling musical project of Zooey Deschanel and M. Ward, came out of the gate in 2008 with three albums of original classic pop in five years. In the decade that’s followed since, the duo have opted to put original material aside, reveling in a different kind of sunshine: covers. She & Him released the spirited Classics in 2014, and a subsequent album full of holiday cuts (2016’s Christmas Party). The duo continue on as pop interpreters with the recent announcement of their third and latest all-covers album, Melt Away: A Tribute To Brian Wilson.

She & Him’s seemingly accessible sound has always been belied by more esoteric instincts; the pair value deep cuts as much as they do big hits. Assembling the tracklist for Melt Away offered Deschanel and Ward offered an ideal opportunity to celebrate both sides of Brian Wilson’s decades-deep songbook — both the standards, and the arty b-sides.

“We chose songs without any regard to their chart performance. The obscure ones hit us just as hard as the more popular songs — and all are ripe for re-imagining, re-interpreting, and re-inventing,” the duo said in a statement alongside the album announcement. “Brian writes songs of beauty and loneliness and vulnerability better than anyone — and by sequencing them next to popular songs of confidence and love and fun, it creates a more complete picture of life on earth.”

Ahead of Melt Away’s release on July 22nd, She & Him have shared a kitschy music video for “Darlin’,” drawn from the Beach Boys’ Wild Honey, released initially in 1967. They also shared the audio of the more well-known hit “Wouldn’t It Be Nice.” Check out both, as well as Melt Away‘s full tracklist, below.

Melt Away: A Tribute to Brian Wilson Tracklist