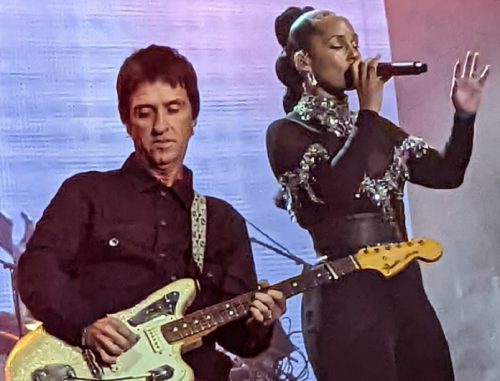 Empire State of Mind no more: Alicia Keys is going full-on Brit this month. After a mini-set at the center of the Queen’s recent Platinum Jubilee festivities (I always knew Elizabeth II was the titular “Girl On Fire…”), Keys journeyed up the country for a subsequent performance at Manchester’s AO Arena. Midway through the show, Keys invited Smiths guitarist Johnny Marr to the stage for guest spot on an unexpected cover of The Smiths’ “This Charming Man.”

Keys meets the classic indie pop banger in the lowest portions of her register, digging in with a full-on Morrissey-esque delivery. Given her expansive range, it’s a shame that Keys doesn’t do more to make the straight-ahead take squarely her own; the whole thing feels a bit karaoke-adjacent, even considering Marr’s royal drop-in. But the mutual admiration between Keys and Marr is the key. Besides their obvious enthusiasm on stage, Keys and Marr each took immediately to Twitter to make their fandom for each other known: “Brother!! That was literally one of the best moments of my LIFE!!! Thank you for blessing me and Manchester!!!!!” With that many exclamation marks, who knows what else is in store for these two crazy kids? My kingdom for a Keys-Marr version of “Ask…”

Check out the 40 Best Smiths Covers Ever here.