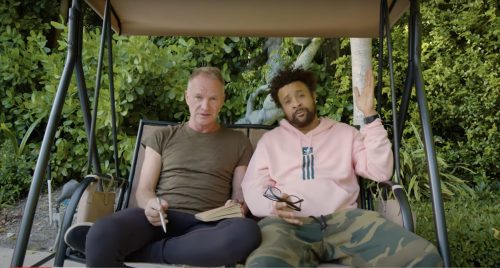 Picture this: Shaggy and Sting — on a sandy beachfront, bangin’ on about Frank Sinatra. This scene may sound like some luxuriant fantasy tableau (or, possibly, a clunky callback to Shaggy’s “It Wasn’t Me”), but it is also now a sweet, sweet reality. Continuing their unlikely creative partnership in the wake of 2018’s 44/876, Shaggy has announced his latest album: a full-length reggae Sinatra tribute record, brilliantly titled Com Fly Wid Mi and featuring Sting in the producer chair.

Though most aspects of this project might seem unbelievable on paper, its roots run deep for Shaggy. In a statement to accompany the announce, Shaggy recounts:

“I’ve always been a Sinatra fan. As a child, Frank’s music was often playing in our house and on Sundays, all of the Jamaican radio stations would play the greats – Sinatra, Bing Crosby, Nat King Cole, et cetera. It’s great to be working with Sting again. He’s the brother I never knew I needed!”

Sounds like Shaggy wants to show the nation his appreciation for Ol’ Blue Eyes in a big way. Though none of Com Fly Wid Mi’s tracks have yet been properly trickled out, the album’s announce was heralded by an intimate beachside video Q&A, featuring the legends chatting about the music and their collaboration in a sandy swing. Dive into the conversation below, and stay tuned for more reggae Sinatra tracks to roll out prior to Com Fly Wid Mi’s release on May 25th.