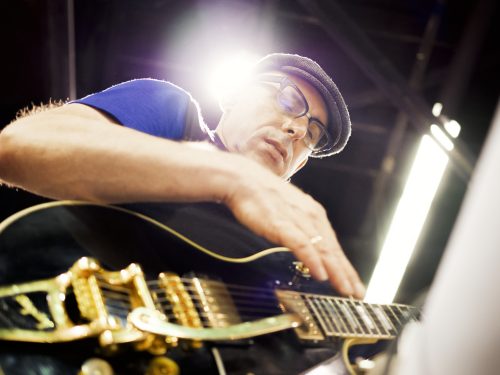 Guitarist Joe Gore has played on a decade’s worth of late-era Tom Waits albums, from 1992’s Bone Machine through 2002’s Alice and Blood Money. He’s also recorded or toured with the likes of PJ Harvey, Tracy Chapman, Marianne Faithfull, Eels, Courtney Love, John Cale, Carrie Underwood, and Les Claypool. It’s kept him so busy that, despite one of those AllMusic discographies where you just keep scrolling and scrolling, he hasn’t released anything under his own name until now.

His debut album Falling Through Time: Music from the 1300s looks back – way back – to music from the 14th century. But it’s not just for Middle Ages music buffs. Gore performs this music note-for-note, but using modern instruments and production. It’s a fascinating combination of reverence in some respects, and pushing the boundaries of how this music can sound (synths! guitar effects pedals!) in others.

In the album’s extensive liner notes, Gore writes about how he first became obsessed with medieval music as a teenager. Back then, he was obsessed with historical accuracy, but now he wanted to expand the way these old compositions could sound, comparing his approach to productions that stage Shakespeare plays in modern settings. His “rule book” for the album was: Play only the original notes and rhythms, but no restrictions on instrumentation, production, rhythmic accompaniment, or octave transposition.

“This approach isn’t as radical as it may seem,” he writes. “Medieval composers rarely wrote for specific instruments. They simply provided the notes, which musicians would perform using whatever collection of voices and instruments they could muster. Drums and percussion were routinely added, though they weren’t indicated in the notation. Granted, the composers never envisioned electric guitars and drum machines. But they expected the instrumentation to vary from one performance to another.”

The album is worth listening to in whole (it’s on Bandcamp and elsewhere), but, as a place to start, here are two tracks accompanied by excerpts from Gore’s liner notes:

Musicology professors use this bizarre composition to freak out their students. It’s so dark … so low-pitched … so frickin’ chromatic! The lyric is as strange as the music: “The smoker smokes through smoke, a smoky speculation.” These words probably refer to a mysterious artistic clique known as the Smokers (“les fumeurs”). And what were they smoking? Tobacco wouldn’t arrive from the New World for another century. When I was young, scholars speculated that the Smokers indulged in the hash and opium that arrived in Western Europe with the returning Crusaders. Sadly, the current thinking is that “smoke” is merely a metaphor for a confused state of mind. But I’ll always picture Solage (about whom we know zilch) with a quill in one hand and a bong in the other.

This complex piece exemplifies ars subtilior. It’s a strict canon — that is, every note heard in the left channel gets echoed one measure later in the right channel, accompanied by a bass line that ties the whole room together. The rhythms are shockingly complicated. Senlesches may have been born in a French village of that name, though he gigged mostly in Spain — first for Eleanor of Aragon, Queen of Castile, and then for Cardinal Pedro de Luna. Pedro later became Benedict XIII, one of the “antipopes” squabbling over the papal throne. Famously, this song about a harp is notated in the form of a harp.