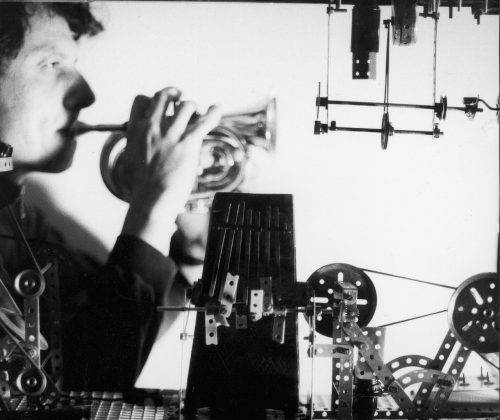 Elvis Presley was many things: rock n roll luminary, Hollywood workhorse, peanut butter and banana sandwich maven. But rarely, if ever, is The King considered avant-garde. His music, movies and moves may have been rebellious at the outset, but it’s hard to deny that Elvis was entrenched in the mainstream for the whole of his career. This spring though, a pair of open-minded French musicians, David Fenech & Pierre Bastien, bring The King into uncharted, and decidedly more esoteric, cultural territory: the 21st-century noise-rock underground. Elvis swiveling around on bespoke Bandcamp pages and on limited white-label LP pressings — whoda thunk?

Suspicious Moon is Fenech and Bastien’s new album of purposefully experimental Elvis covers, released a couple of weeks ago by Italian record label Improved Sequence. The record draws its mash-up title from a collision of two of Presley’s most iconic hits; musically, too, Suspicious Moon uses Elvis’s music equally as a source of chaos. The title tracks in particular—“Suspicious Minds” and “Blue Moon”—toss around the songs’ raw parts with nothing to lose.

Using Presley as a jumping point for musical experiments was something that even Fenech and Bastien themselves didn’t anticipate until a chance meeting at a Parisian salon. The pair, who have quite a pedigree as performers and composers of their original work, describe their first impromptu performance of “Blue Moon” originating from a house party, themed around the color blue. Fenech began playing “Blue Moon” on a whim, and Bastien simply came along for the ride. In a statement accompanying the record’s release, Bastien elaborates on Suspicious Moon’s overall aims (or, really, lack thereof):

“Our choice of the Elvis Presley song book for this record may seem strange to many. It seems strange to me as well. Not that I dislike the original music, but before our sessions it had never been a direct source of inspiration. Paradoxically, this distance gave me freedom and flowing ideas. I hear similar qualities in David’s parts too. We hope that our relaxed attitude and its positive outcome will be reflected in this album.”

There’s nothing traditional about Suspicious Moon — the stunt of it all is the record’s prevailing through-line. Among the eleven cuts, “In the Ghetto” is the selection that coheres into something properly profound in its own right. But poke around the whole of Suspicious Moon and you’ll find Fenech and Bastien reveling in the outlandishness of their concept, bringing The King to unexpected and trippy extremes throughout.