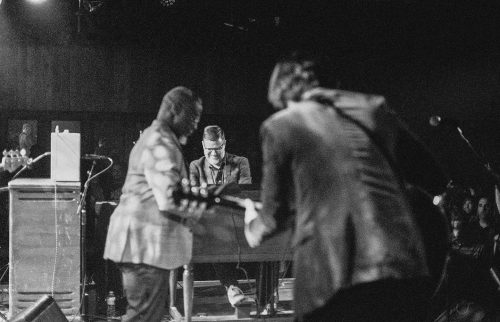 Though the Beatles’ iconic Revolver lead-off “Taxman” was influenced by soul, most fans probably haven’t really thought of it as a soul or funk song. The Greyboy Allstars are here to change that.

The Greyboy All Stars have been releasing soul jazz records for nearly 30 years. Their latest is inspired by a series of livestream shows they put on during the pandemic. Realizing that they were playing a ton of covers during these shows that they’d never released, they decided to put out a covers album. And their version of “Taxman” is considerably more soulful and funky than the original.

In fact, in the early goings it sounds a lot like Booker T and the MGs plus a horn section (i.e. the Mar-Keys). The rhythm guitar is closer to Steve Cropper, the bass is less angular, the organ takes the lead vocals and the horns take the backing vocals. The sound makes you imagine an alternative reality in which the MGs had made a whole album cover of Revolver instead of Abbey Road (on their classic McLemore Avenue).

But this is soul-jazz, not just soul, and the Allstars stretch out the song a fairly long guitar solo which is extremely different from Paul McCartney’s searing original, follow by an organ solo worthy of Booker T. Check it out below.