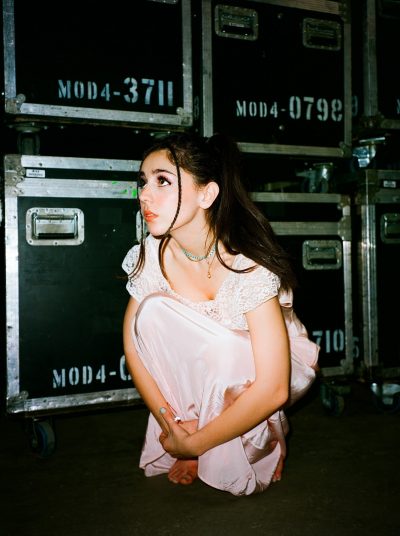 A few weeks ago, New York songwriter Samia released a single with covers of The Eagles’ “Desperado” and the Magnetic Fields’ “Born on a Train. Samia’s first album, 2020’s Baby, and a brief follow-up EP Scout, mix abstract imagery with personal details verging on oversharing about that age when you’re doing adult things, but still feel like a kid. Streaming services worked their best to make me take notice of her; songs from the album ended up on lots of of my curated playlists, and now and then a great line would jump out at me.

Once I finally played the whole album, I ended up waking up hearing lines in my head and eager to put the album on again every day. With production that’s creative but never inaccessible, Samia is the sort of songwriter who writes lines like “I got bug bites on my leg” on the same album as lines like “Fuck if your one sliced hand is not the keeper of the back of my neck.” I struggle to explain to people why this album hits me so hard, or what elevates her above other young artists singing about similar themes. Sometimes I just say she reminds me of Sharon Van Etten; other times i’ve described as a Liz Phair doing 80s music.

On the new single, the piano take on “Desperado” is no thematic departure from her work to date, whether she’s singing to herself or one of the indecisive lovers who populate her songs; she’s said that the major theme of Baby is coming to grips with the fact that she needs other people. But that’s the opposite of the point of “Born on a Train,” which Samia notes is a song “in conversation” with “Desperado.” The Desperado famously needs to let somebody love them; the speaker in “Born on a Train” is unapologetic that they’ll about the fact that they’ll be leaving one day.

Like Samia, The Magnetic Fields often have a bit of playfulness in their darkest songs, and the other way around. As a train song, “Born on a Train” sounds like the sort of Woody Guthrie pastiche Tom Waits might write. The chorus (“I have to go when the whistle blows, the whistle knows my name / baby I was born on a train”) sounds like a fairly generic folk song (disguised by chamber pop production on the 1994 original), but in the 12 lines that make up the verses, there are hints of something else going on. Take the evocative first verse:

Some roads are only seen at night
Ghost roads – nothing but neon signs
and some nights the neon gas gets free
and turns into walking dead like me.

Some other lines suggest that Stephen Merritt meant “walking dead” quite literally. Is this a love song from the point of view of a ghost? Or a vampire? You could write several wildly different backstories for the song – they’ll be right, and they’d all be good. This is a trait it shares, incidentally, with many of Samia’s own songs.

Samia’s (mostly) acoustic version rocks you to sleep, then leaves you all alone. The arrangement reminds me of Rufus Wainwright’s take on “One Man Guy.” Nick Hornby wrote that the moment the harmony vocals began in that recording, it sounded like God Godself had entered the room. There are many similar moments here, such as when Rachael Jenkins’ harmony vocals drift in, when the backing vocals in the third verse start to sound like a musical saw, and when a few stray arpeggios appear in the last chorus. The production builds and recedes likes waves on the shore. The brief electronic noise before the third verse sounds like a ghost trying to chime in with a solo using some instrument only a ghost who haunts the railroad tracks would play.

Though no one would describe the arrangement as “weird,” the performance subtly latches onto that intangible strangeness in the lyrics just well enough. Caleb Hinz’s intimate production deserves credit, but it wouldn’t work without Samia singing like a ghost idly singing to herself as she wanders down one of those roads made of nothing but neon signs. She brings it a bit of the otherworldliness that you find in all those songs about trains and dead people on Anthology of American Folk Music.

When a shamelessly autobiographical debut album is as good as Baby, I sometimes have to wonder, “What else can they do? Will this writer be able to write about being 32 as compellingly as they write about being 23? Does anyone?” This gorgeous cover suggests that Samia has a lot more up her sleeve.