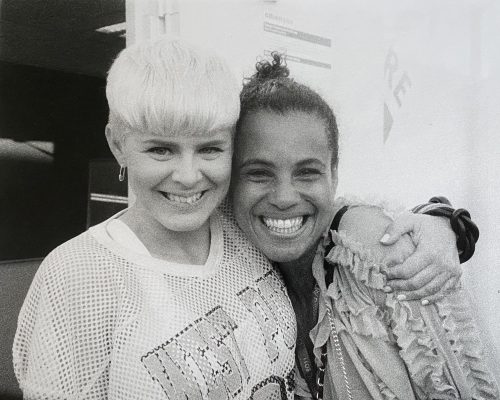 Swedish pop hero Robyn has stayed fairly quiet since releasing her last album Honey in 2018, but she returned this week with a cover of 1988’s classic “Buffalo Stance,” by her fellow Swede Neneh Cherry. The single comes from an upcoming Cherry compilation project and features Blood Orange’s Dev Hynes on production and Swedish rapper Mapei. This indie-pop ballad sounds very different than Cherry’s iconic but very late-’80s rap sounding original; no turntable scratches to be found in Robyn’s version.

After tweeting a hilarious comparison of photos of her and Cherry in 1989 [spoiler: only one of them has a mullet], Robyn wrote, “My friend and I spent most of our summer that year playing cards and listening to [Cherry album] Raw Like Sushi. Even though I didn’t understand all the words I knew that she was on my side. The power in her voice revealed truths about what it is like to be a girl without making excuses and was intensely inspiring to me. Ten year old me would have been completely blown away by this and that’s how I still feel now about @misscherrylala and this powerful song.”

Cherry herself added in a statement: “I love that I could write an essay with all the things I could say about Robyn and I love that she leaves me speechless at the same time. She is my sister, my friend, my family, a creative inspiration.”

Listen to Robyn’s “Buffalo Stance” below.

Check out more covers by and of Robyn here.