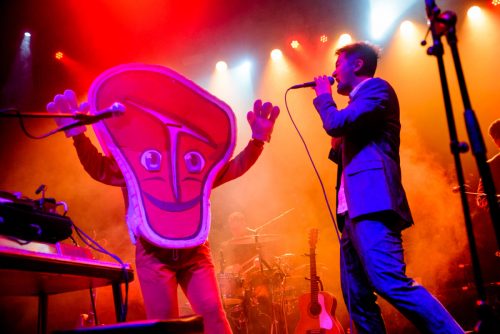 Indie-pop violin wizard Kishi Bashi just kicked off his first tour of the pandemic, celebrating ten years of his debut album 151a, and every show features a pair of covers. The first, of Talking Heads’ “This Must Be the Place,” he’s been doing for a while (he noted somewhat ruefully at a recent live show that it has more Spotify streams than any of his original songs). The second, though, is new and extremely fun: A version of the late great Meat Loaf’s “I’d Do Anything for Love (But I Won’t Do That)” featuring a person dressed as a giant steak (get it, meat?).

The song starts as an extended comedy bit where the steak-person wants to play piano despite his oversized Mickey Mouse fingers, but shifts into a real-deal cover of the iconic cheesy power ballad. Cellist Emily Hope Price takes on the Lorraine Crosby part from the original, and the whole band sells the hell out of it. It then segues into Kishi’s own “The Ballad of Mr. Steak” – the reason for the steak costume’s existence.

Check out a video from last night’s show in Burlington, VT below – and, if you live in Toronto and want to dress up like a giant steak tomorrow, Kishi’s looking for volunteers.

Check out more Kishi Bashi covers (including “This Must Be the Place”) here.