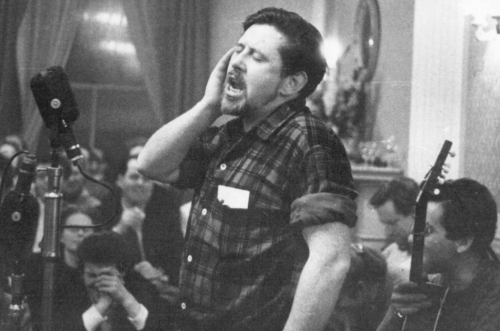 I can’t judge the person who thinks that “Every Breath You Take” is a song of pure devotion, or that “Born in the USA” is a patriotic anthem. I can’t judge, because for years I insisted “Dirty Old Town” was a traditional Irish ballad. We all make mistakes.

The truth is that “Dirty Old Town” has nothing to do with Ireland, and it’s not all that old. Ewan MacColl wrote the song in 1948 about the northern England industrial town of Salford, where the songwriter was born and raised. He came up with the song as a quick fix for a play he had written about Salford—he needed a bit of filler to facilitate a costume change. A humble beginning for a song about MacColl’s own beyond-humble beginnings.

Despite his place of birth, MacColl long claimed to be Scottish. As an upcoming dramatist, he allied himself with the Scottish literary renaissance then taking place. His Scottish parents christened him James Henry Miller, but he renamed himself in honor of a nineteenth century Scottish poet.

So how did the song’s connection with Ireland take hold? It’s mainly because popular Irish trad folk band the Dubliners recorded a version in 1968. At that point the Dubliners had played and recorded traditional Irish material almost entirely. Presented in this context, it’s no wonder the song about northern England passed as Irish.

But it’s also a matter of timing: the Dubliners’ version came out the same year that “The Troubles” began in Northern Ireland—the bombings, riots, protests, and paramilitary campaigns that would last for 30 years. The violence in the song’s climax—“I’m going to make a good sharp axe […] I’ll chop you down like an old dead tree”—could not help but resonate with the political and sectarian resentments erupting in Belfast and beyond. For Ewan MacCall, an avowed Marxist, the song’s anger had to do with the brutal labor conditions in the industrial north (axe = communism, tree = capitalism, at least according to some interpretations), but this is a classic case of a song transcending its own origin story.

MacColl had another passion and pursuit: he was a key architect of the post-war folk-song revival—a sort of Celtic Alan Lomax. In fact Lomax—the champion song hunter from Texas, the man whose field recordings brought to light Robert Johnson, Leadbelly, Muddy Waters, and hundreds more—joined forces with MacColl when the American decamped to the U.K. and Spain during the 1950s. MacColl along with Lomax had everything to do with the blossoming of folk music clubs and folk recording labels on both sides of the Atlantic. In other words, it was MacColl’s efforts to give folk traditions legitimacy and popularity that created the very cultural conditions in which songs like “Dirty Old Town” could thrive.

Here’s our selection of covers, the big influential ones and the overlooked ones both.

Pixies founder and frontman Frank Black (aka Black Francis) hails from Boston, probably the most Irish city in North America. But the city we need to talk about here is Nashville. Black’s cover is so infused with southern soul music and country music influences, you might think for a second it’s Clint Black, not Frank Black. This rendition is from 2006’s Fast Man Raider Man, an album Black recorded with a bevy of Tennessee studio legends (Steve Cropper among them) and younger country notables like Marty Brown (in a vocal duet with Black). It’s a variant that shrugs off the usual associations we make with the song and with the ex-Pixie himself. After Black and Brown trade verses, the volume swells and they sail away on a wave of shouty harmonies. They bring a sharp edge back into the song, especially the part about the axe.

For a native of San Antonio, Texas, Steve Earle has formed impressive connections to Ireland and Irish music. The Pogues guested on his first album. His mid-career hit “The Galway Girl” is accepted in Ireland as an Irish standard—which might remind you of another non-Irish writer of a song adopted by Ireland.

This track comes out of Earle’s collaboration with Belfast-born Bap Kennedy. Despite Kennedy’s partnerships with high-profiler like Van Morrison and Mark Knopler, the singer-songwriter flew below most people’s radar. He led a band called Energy Orchard, and released a few solo albums before passing away in 2016 at age 54. This track is particularly obscure: it is an unlisted bonus cut on Kennedy’s solo debut (produced by Steve Earle and released on Earle’s label). In fact it’s really an Easter egg, coming on after something like 25 minutes of silence on the album’s last track.

Earle later covered “Dirty Old Town” on a MacColl tribute album, but this duet with Bap Kennedy has the correct level of rough, with Jerry Douglas on dobro providing the smooth.

As we’ve noted on a few occasions in the past, Bettye LaVette is a singer known to take command of a song in anyway she sees fit. If the lyric needs some rewriting, a rewriting it gets.

“Dirty Old Town” is a song that has always lent itself to renewal. Its first line originally ended with the phrase “by the Gasworks croft.” Interpreters usually change “croft” to another one-syllable word—“glow,” “door,” “walk,” “wall”—because “croft” is obscure. The original lyrics also referred to “the Salford wind,” until altered to “smoky wind.” These modest retrofits helped modernize the song and make it more relatable.

When LaVette sings “Dirty Old Town,” it’s Detroit she’s singing about. MacColl starts with the gasworks, LaVette with the Graystone—the famous dance hall that was Detroit’s citadel of jazz and Motown music. In MacColl’s original, “cats are prowling,” but in LaVette’s version “cops are prowling.” The violence that occurs in LaVette’s version may be racially motivated, but LaVette unites with MacColl in bearing witness to brutality in its varying forms. LaVette also celebrates her city, and in the climatic verse she throws us a curve she expresses pride in the fact that Detroit resisted the axe that tried to chop it down. She’s a soul survivor herself, and in her hometown’s defiance sees a reflection of her own story.

If the “Definitive Version” medal doesn’t go to The Dubliners for their cover, the award must go to The Pogues. After all, it’s got the proper lineage – the songwriter’s daughter Kirsty MacColl herself was affiliated with the Pogues (though her stint came some time after the “Dirty Old Town” recording).

Frontman Shane MacGowan pretty much presented like a bloke fresh off a shift at the gasworks–he sounded like one, too. That’s part of the charm of the Pogues’ cover. In a parallel to Ewan MacColl’s bio, the Englishman MacGowan came to identify strongly with his Irish immigrant parents’ background. After his punk incarnation, MacGowan reinvented himself musically with an Irish roots concept. Pogues-style “Dirty Old Town” borrows from the Dubliners version and from the original version. The band gives it an instrumental verse, and they do a change key on the verse, too, which boosts the song’s energy most rousingly. No wonder their cover re-ignited interest in the song.

We close with a (not the) definite version of the song. (It’s a split decision with The Pogues—and the split is along generational lines.) Usually we talk about cover versions bringing a fresh new angle or sound to an older, somewhat stale initial take. The Dubliners version of “Dirty Old Town” somehow feels older than MacColl’s 1952 original, more trad than the original, which after all had an early modern jazz feel to it, complete with clarinet solo.

If The Dubliners thought The Pogues somehow piggy-backed on their work or stole their thunder, they sure didn’t show any resentment about it. The two bands teamed up numerous times afterwards; they appeared on each other’s albums, and sometimes shared the same stage at the same time (with Joe Strummer joining in on at least one occasion, in case the stage wasn’t crowded enough). Both bands probably loved crossing generational divides in addition to nationalistic ones. They were all of them rakes, rebels, and rovers.