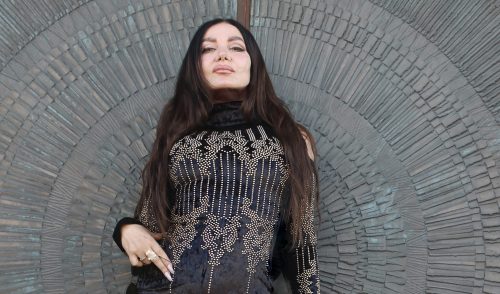 Betty Moon is Canadian music industry veteran who’s been releasing music for 35+ years, first in a punk band and then throughout a long solo career that has seen more than 10 albums. Her latest album is a covers record featuring both faithful and not-so-faithful covers of famous and not-so-famous songs. And one of the most famous is covering the Rolling Stones’ iconic “Gimme Shelter.”

Moon and her band dispense entirely with the Stones’ beginning, as they should. Instead, it opens with programmed beating and an acoustic guitar. The only similarity to the original, iconic opening is a woman singing wordless vocals. It’s an intro that signals a different approach. The instrumentation is sparse – a closely-miced acoustic guitar, the drum programming, a keyboard, the occasional second guitar – leaving the focus on Betty Moon’s voice.

The only obvious concession to the original is the guitar solo, which echoes parts of Richards’ original. Moon doesn’t stray too much from the vocal melody but she strays enough that it doesn’t sound like she’s trying to ape the original’s guest singer Merry Clayton.