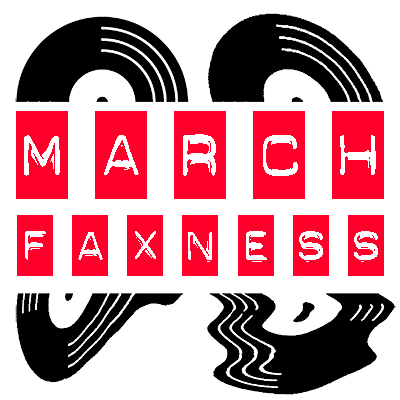 Every year, the site MarchXNess.com hosts a March Madness-style poll for songs on a given theme. One year, the theme was grunge; another year, one-hit wonders. 64 songs battle head to head all month for fan votes, eliminating each other along the way before a winner is declared at the end of the month. And this year, the category is: Covers.

All month, 64 covers, many iconic, face off against each other. Each comes accompanied by a written essay by a different writer, which are secretly the best part – you come for the game, you stay for the longreads. Round One just finished, which means half the songs have been eliminated. RIP to, among many others, Cake’s “I Will Survive” (beaten by Aimee Mann’s “One”), Bronski Beat’s “It Ain’t Necessarily” (beaten by Cowboy Junkies’ “Sweet Jane”), and Husker Du’s “Eight Miles High” (beaten by Joan Bett’s “Crimson and Clover” – an outrage IMO).

Here’s where it stands after Round One (click here for a bigger version): 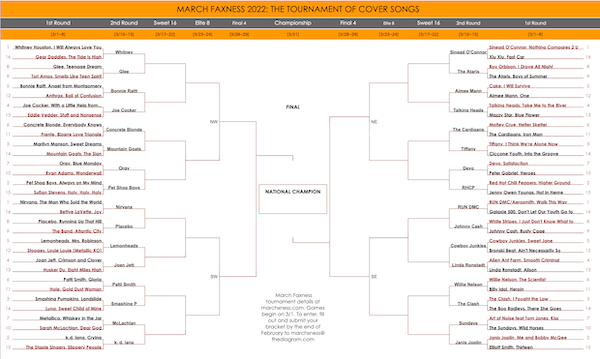 The Second Round begins today with these matchups:

Some tough calls there! So as the tournament continues towards the Final Four and eventually the winner, I asked March XNess co-founder Ander Monson a few questions:

Why did you decide on covers for this year’s bracket?

How did you pick the covers you did? And how did you decide on seeds?

Once the theme is established, the Selection Committee gets a lot of input from folks then listens to typically hundreds to thousands of songs that fit the theme to come up with the longlist (128 songs typically). Each summer we do a lottery for the 64 spots in the tourney (we had around 300 folks who put their names in this year for those spots) and when selected, the writer may choose their songs. Usually this is only from the longlist, which we determine, but in Faxness, we let writers choose any song that satisfies our criteria (songs must be 10+ years old, and songs must have been originally released commercially by an artist then subsequently covered and released commercially by another artist–so no live-only versions count unless, like “Unplugged,” they were then released commercially). So this year they didn’t have to pick from the longlist (but they could, if they wanted ideas).

Any results from the first round that surprised you?

The real x factor is when a fandom or a band/musician themselves gets in on the tournament, which is impossible to predict. So Local H ended up beating King’s X last year in the “grunge-era” bracket championship largely because both bands and fanbases got involved and swung the votes.

This year’s it’s been hard to say. We’ve almost never had top seeds make it to the final four but I think we might this year. So far it’s seemed a lot like the bigger acts/songs are winning, with the notable exception of some acts who have a lot of cultural baggage (like it was not surprising to see Marilyn Manson get voted out by a 14-seed given the accusations leveled against him; also the Mountain Goats have waded into this tournament before). Looks like we only have a 14 and a 12 seed left, and otherwise it’s all higher seeds, pending the results of today’s and tomorrow’s games.

Any predictions you care to make about, let’s say, the Final Four?

I have Cowboy Junkies winning it all, personally, and that could happen, but I’ve yet to pick the winner of one of these tournaments correctly, so I’m afraid my predictions aren’t very reliable. I didn’t see (13) Linda Ronstadt beating (4) Alien Ant Farm, for instance.

If I were to pick a final four based on the results so far and my hunches on them I would go Mountain Goats, Placebo, Tiffany, and either Cowboy Junkies or Johnny Cash. I guess I really don’t believe in the 1 seeds, but so far they’ve all looked great.

Go place your votes and read all the great essays now at http://marchxness.com/. Check the site every weekday for a new matchup.