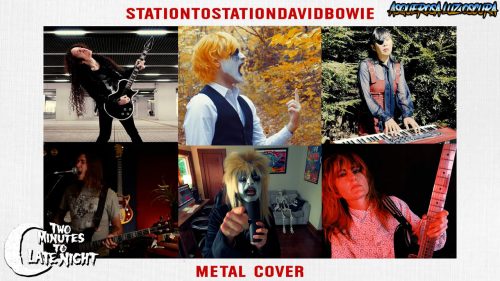 “Station to Station,” the title track from his 10th album, is David Bowie’s longest song. It introduced Bowie’s latest character, The Thin White Duke, and marked a return to artier music after the flirtation with Philly Soul on Young Americans. There’s still soul in Bowie’s music at this point, but now it’s weird.

The gang at Two Minutes to Late Night, led by the so-called Gwarsenio Hall (comedian-musician Jordan Olds), have been pumping out pretty faithful metal and metalish covers of a wide range of songs since the pandemic began. Their covers follow a familiar format: the song itself stays much the same but the guitars are turned up (unless they already were) and Gwarsenio Hall camps it up, usually as one of the rhythm guitarists. (The songs nearly always have more guitarists than necessary, which is part of the fun.)

Their “Station to Station” cover deviates from the formula a little bit. First, Hall is on vocals, instead of the usual guest vocalist. And as the song goes on, he gets bolder and bolder. Second, they really lean into the old school metal vibes here, with four guitar solos. The result is campy, like all their covers, but this metal cover of an avant garde soul track feels satisfying in a way I didn’t expect. Maybe “Station to Station” has been asking for and old school metal cover all this time.