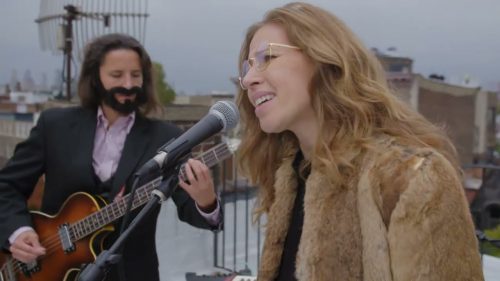 Multi-genre combo Lake Street Dive have shared a version of The Beatles’ “Two of Us,” filmed live on a rooftop in Brooklyn. As with their cover of “Don’t Let Me Down,” released for Halloween 2020, the video finds LSD’s members fully bedecked in the Fab Four’s iconic Rooftop Concert garb: vocalist Rachael Price as Lennon; bassist Bridget Kearney as a spitting-image McCartney; keyboardist Akie Bermiss as Billy Preston; and drummer Mike Calabrese in a Ringo red puffy shirt. Guitarist-songwriter Vilray, musical compatriot of LSD and Price’s duet partner in the pair’s sideproject Rachael & Vilray, guests with the song’s iconic guitar riff.

Though Lake Street Dive’s covers typically veer towards novelty and general hijinx, the band’s version of “Two of Us” here is refreshingly pure, spare and sunny — belying both the elaborate costumes, and the otherwise gloomy winter backdrop. And while The Beatles’ version reads purely as a Lennon-McCartney feature, whittled down to just acoustic instruments and the duo’s harmonies, Lake Street Dive bring a much wider scope to “Two of Us,” involving the band’s full membership. (Even a cardboard cutout of the band’s former trumpeter, guitarist and arranger, Mike “McDuck” Olson, makes an honorary appearance.)