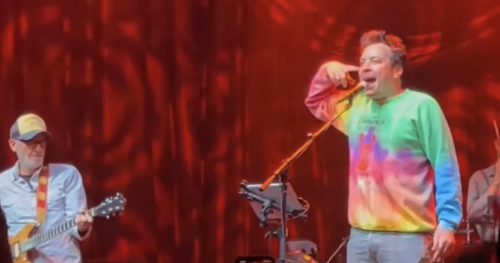 Since the Grateful Dead’s earliest heights in the ‘70s and through until today, countless bands, from local crews to amphitheater-ready supergroups to offshoots that feature musicians/members from within the Dead’s own orbit, have built entire careers around worming into the Dead’s vast, varied catalog. At the peak of the present-day scene are a pair of infallible groups, Dark Star Orchestra and Joe Russo’s Almost Dead. But solidly just a few rungs beneath are The Stolen Faces, the Dead tribute act based in Nashville. Last week, The Stolen Faces had a special guest appearance from one Jimmy Fallon, who joined the tribute band on stage at Nashville’s Brooklyn Bowl for a version of the Dead’s “Tennessee Jed.”

Stolen Faces make the most of their loose take on “Tennessee Jed,” leaning into the song’s sloppy stomp and keeping their cool for the big blitzed crowd. Fallon, who rolls up in appropriately tie-dyed crewneck sweater, has an almost inverse-Jerry energy: bounding, grinning, strutting, flipping his sunglasses on and off and, at one point, seemingly attempting to crowd surf. It’s doubtful that Fallon is a stone cold Dead freak — he squints at the song’s lyrics throughout, and, despite his enthusiasm, it’s hard to figure why exactly he’s blustered in in the first place. But, particularly for less-discerning viewers beyond the immediate and ever-persisting Dead scene, Fallon’s goofball drop-in is a novel and good-natured bit of fun — not to mention a big signal boost for Nashville’s The Stolen Faces. Check out the cover below.