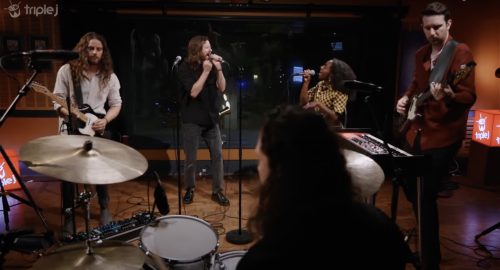 A year ago, I did a Covering the Hits feature where the song randomizer sent me to Post Malone and Swae Lee’s “Sunflower.” I found some killer covers of the Spider-Man soundtrack smash, by Vampire Weekend and AJR alongside lesser-known artists, and now there’s another to add to the pile, by Australian rock band Holy Holy. The duo of Timothy Carroll and Oscar Dawson performed it on radio show Like a Version, augmented by their live band and Tasmanian-based singer Medhanit.

As Carroll explained in an interview, they chose “Sunflower” because has “a beautiful tune with really an insane number of melodies…and overall this dreamy, melancholy, happy feeling that we loved.” He said he listens to the song driving around and always felt it ended too soon, so on their cover they gave it one additional, climactic chorus. “Almost all Holy Holy songs get big and lost in a wall-of-sound thing…and that’s kind of where we took this in the end,” he said.

One of Holy Holy’s previous Like a Version appearances landed on our Best Beyoncé Covers Ever list! Check that out here.