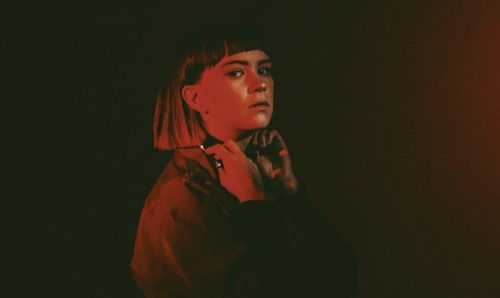 Harpist, producer and singer Janessa Smith a.k.a. Goldmyth is a Utah native with a stream of shape-shifting singles. It’s easy to sink into Goldmyth’s music — her default vocal mode is an airy mid-range, gliding just above rubbery grooves and earworm-y bass lines. Her songs feel both washed-out and blissful, filled with malaise yet still musically vivid.

New from Goldmyth is a cover of “On Melancholy Hill” by Gorillaz, an idiosyncratic slow-burner drawn from the band’s 2010 album, Plastic Beach. Damon Albarn‘s slacker existentialism feels like somewhat of a kindred spirit for Goldmyth; in a statement that accompanied the cover’s release, she describes her discovery of the song:

Once I played my electric harp on the lead line of this classic 2010’s sad bop, it was a match made in heaven.

This song is a perfect blend of upbeat and groovy with the undertones that get you in your feelings, All the things that I’m really about as an artist. We made this really beautiful music vid to set the melancholy tone just right.

I never actually heard this song as a kid when it was released. But when I heard it for the first time on the way to play a show with my band, I felt like wow, this is a song I’ve been looking for for a long time. It feels like I have a kinship with this song, so I had to cover it.

I recently had a song placed on the HBO show “The Sex Life of College Girls,” and there’s an audience finding my music for the first time right now, so I’m releasing this song as part of the sonic and visual palette of who Goldmyth is.

Check out the music video for Goldmyth’s cover of “On Melancholy Hill” by Gorillaz below.