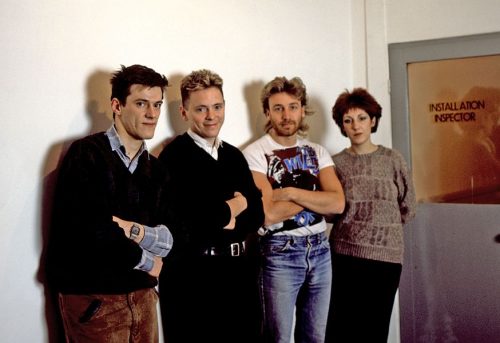 I know, too obvious, but hang fire for a moment. Have you actually heard it, rather than assumed it? Yes, the bluegrass renegades are the token go-to for Appalachian string band cover versions of just about everything, but give a thought as to why. Rather than just a full-tilt pelt through the tune, Hayseed Dixie offer a little more nuance than you might expect. OK, you get the full-tilt pelt as well, but the pizzicato fiddle at the beginning, later reprised by the mandolin, shows some thought, as indeed does the jaw’s harp. It’s true, the vocal rendition does get a tad carried away with itself, but the idea to ally rave culture with medicine show hillbilly preaching is a masterstroke. Plus I am a sucker for banjo and it’s my list.

File under soft rock? I love the prog-lite opening to this, a beguilingly bizarre concoction that takes quite away the direction of later flow. Indeed, it is only as the little girl vocal of Pernille Rosendahl chips in that the song becomes recognizable. If her voice breaks into the mood a little too intrusively, bear with that, as the backing then weaves in about her. It all (sort of) fits, and when the dubby bits start breaking off, it all stacks together a treat. Like fellow Scandis Roxette, there is a naïf charm that just about redeems it. Plus you haven’t thought about the original whilst it plays, which is clever. The band existed between 1996 and 2005 and were, as they say, big in Denmark.

I love this! Miguel Escueta sounds altogether like early 80s indie-goth, Fields of the Nephilim, the Cult, all of that, lots of floor length leather coats and studded belts. He transforms “Blue Monday,” making it sound, well, mayhap a bit like Joy Division might have approached it. OK, the vocals are a bit less doom-ridden, but it fits. A stalwart of the Filipino rock scene, it says here, Escueta put out a couple of CDs and an EP between 2008 and 2010, if with some crossover of material. It looks as though he covers the Cure as well. Unsurprisingly. Apparently, after this brush with the industry he decided on the safer option of running a bar. I hope he still plays live.

If I didn’t know otherwise, I’d swear this was youthful indie-electronica darlings London Grammar. Not a bad thing, except perhaps for this duo, busy making a name for themselves ahead of a forthcoming album, having predominantly issued (a lot of) singles. Stripping back the tune into its icy blue heart, the chilly piano is countered by chillier still vocals, the whole stopping what else you are doing just to get the full fix on it. Released a couple of years back, as part of a challenge for a radio station, they were then a trio; they’ve since slimmed down to just Emma Page on vocals and Paul Holliman on keyboards.

Taking a little while to kick in, with the initial dreamy vibe of the backing contrasting harshly with the guttural vocal, head spinning as you try to retrieve the references. Suddenly, as it speeds up, at the halfway mark, the “New Romantic” vibe hits you like a snowplow, possibly the one used in Bowie’s “Ashes to Ashes,” a make-believe video becoming visible in your imagination as it all unfolds. The guitar and keyboards interplays into quite a spell, hints even of Syd Barrett Madcap Laughs-era stylizations, as the singer simultaneously tears apart any such mood. Thankfully, if formulaically, by the time they make it up and lurch into gear it makes sense. From Dreams Never End, a 2015 tribute album to New Order, made for the prolific tribute label The Blog That Celebrates Itself Records (check out the rest of it here).