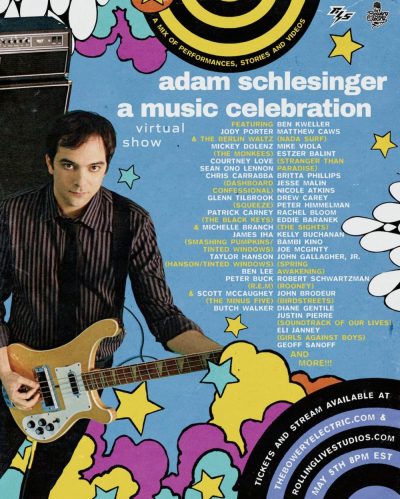 Back in May 2021, Fountains of Wayne guitarist Jody Porter organized a tribute to his late bandmate Adam Schlesinger. Adam Schlesinger, A Music Celebration featured, among many others, Courtney Love, R.E.M.’s Peter Buck, Squeeze’s Glenn Tilbrook, Dashboard Confessional’s Chris Carrabba, Sean Ono Lennon, and a reunion of Schlesinger’s supergroup Tinted Windows. At the time, it was a paid livestream to raise money for musician charity MusiCares and then-closed NYC venue Bowery Electric, but now the full thing is up on YouTube. It’s a tribute to the depth of Schlesinger’s catalog that it’s two hours long and no one even covered “Stacy’s Mom”!

Highlights are many, from Chris Carrabba’s mournful acoustic “Mexican Wine” to The Still Out’s dream-pop “Sick Day” to Nicole Atkins and Wilco’s Pat Sasone’s outdoor “Laser Show.” Not everyone picked Fountains of Wayne songs either; Michelle Branch and The Black Keys’ Patrick Carney tackled a song from Adam’s pre-Fountains band Ivy, as did Dean & Britta. Tinted Windows’ Taylor Hanson, James Iha, and Bun E. Carlos performed one of their old songs, and Eddie Baranek covers a song Adam wrote for The Monkees (Micky Dolenz pops up to pay tribute too). There were of course multiple covers of “That Thing You Do” by both Mike Viola and Bambi Kino, and Rachel Bloom, star of Crazy Ex-Girlfriend, for which Adam wrote the music, performed that show’s “Settle for Me.” The deepest cut of all, though, might have come from Butch Walker, who unearthed a hidden gem: “Guitar Center,” a song Adam never released but sounds like a coulda-been Fountains classic.

Watch the full video below, with the tracklist as well. (Of Courtney Love‘s “Hey Julie,” we’ll just say it was nice of her to participate and leave it at that.)