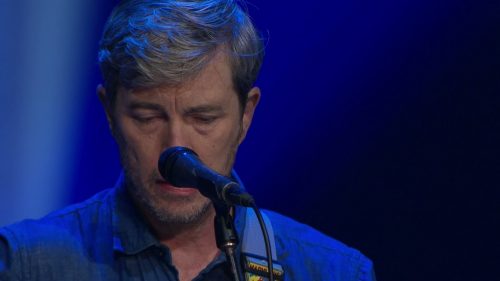 Austin City Limits held their 7th annual Hall of Fame ceremony in the fall of 2021, inducting the likes of Lucinda Williams, Alejandro Escovedo and Wilco as new members of the ACL pantheon. The ceremony premiered on PBS stations across the U.S. last weekend. One of the special’s flagship performances, featured ahead of the broadcast over at Consequence, found Wilco performing “California Stars” alongside a host of guest musicians present for the ceremony — among them, Mermaid Avenue collaborator Billy Bragg, Japanese Breakfast, Jason Isbell, Margo Price and Sheila E. A bit deeper into the proceedings, though, was an even more striking performance: Bill Callahan covering “Sky Blue Sky,” drawn from Wilco’s seminal 2007 album of the same name.

Callahan’s version of “Sky Blue Sky” hovers at a low altitude, bobbing like a tethered hot air balloon – dense, imposing, yet still buoyant. He pulls the track away from its lulling shuffle into something strung out, nearly freeform. Callahan’s serene delivery seems an ideal compliment to Wilco’s initial arrangement, so it’s a surprise to have the cover pulled so deliberately above and beyond the original track. Nels Cline, Wilco’s secret weapon since the early ’00s, offers an instrumental through-line to the original record with his presence on slide guitar. But Cline and Callahan are clearly keen to keep the original merely as a launch point, particularly in a spun-out instrumental duet in the middle of the tune, exploring new patches of sky together.